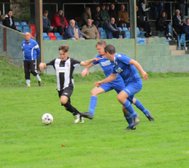 Flint win on the road, despite being down to 10 men

There's a couple of things you can usually say about following Flint, it's rarely dull and we don't do things the easy way !

What, early on, looked to be a comfortable enough game, with the Silkmen having the measure of their opponents, developed into a feisty battle, that Flint had to scrap their way through to earn their first clean sheet of the season and collect their second win on the road.
The visitors had the ball in the Llanrhaeadr net inside the opening couple of minutes, as they started strongly and had their opponents on the back foot. Following a corner, Andy Brown bundled the ball over the line, but celebrations were cut short when the linesman raised his flag, and following a brief consultation the referee disallowed the goal. It was somewhat unclear as to why it was disallowed, whether he had spotted a push in the box, or if he had given offside, as Brown initially collected the ball on the bye-line, but whatever the reason, the goal was ruled out.
Flint continued to pile on the pressure, and Brown, once again deployed in a centre forward role, was the focal point of all their attacking moves.
On 16 minutes, he went close with a header that flashed just wide of the post, following a cross in from the right. The home side had another escape a couple of minutes later, when, from a corner, the ball was bouncing around within the 6 yard box before being cleared off the line in the nick of time.
Llanrhaeadr managed to spring forward on 21 minutes, when Khyam Wytton broke through in space, ans supplied a good cross to Marc Griffiths on the near post. Griffiths' on target effort was blocked and put out for a corner.
Midway through the half, a ball was partially cleared from yet another Flint corner, and fell into the path of Brandon Burrows 22 yards out. The youngster, who is now finding his feet at this level, having benefited from some good game time, let fly and his effort struck the cross bar.
On 36 minutes, Kai Wallis dinked a lovely ball into the path of Brown, who closed in on goal from the left. As he reached the angle of the 6 yard box, he attempted to find the far corner, but his effort finished the wrong side of the post.
Right on half time, Llan's Dan Weaver put in a reckless challenge, that the referee was about to punish, when all of a sudden Sam Hart decided to exact his own revenge on Weaver, and was soon the recipient of a straight red for violent conduct, as his victim escaped with a yellow for his initial tackle. This was the third occasion in the space of five games that players have received straight red cards for their retaliation to tackles on either themselves or team-mates, which only serves to hand the advantage back to your opponents, and becomes incredibly frustrating to keep witnessing.
Having commanded the first half in terms of attacking possession, and gone close on several occasions, Flint now had to adjust to play the second 45 minutes with a man short.
They grabbed the all important goal shortly after the restart. A Richie Foulkes free kick from wide on the left, was dealt with not very convincingly by Llan keeper Connor Lee, and the ball was eventually cleared beyond the 18 yard box. Foulkes was on hand to pick up the ball, and return it with interest from around 25 yards out. As the ball passed through a crowd of players, Damien Ketley managed to get an important touch to divert it into the corner of the net, just beyond the reach of Lee's despairing drive.
Having taken the lead, Flint now looked to protect their advantage , and Tom Kemp was introduced to shore up the rearguard. The home side put together a dangerous move on 54 minutes, when Iwan Matthews broke down the left and into the box. He pulled his shot wide of the goal, and as Jake Hampson blocked the effort and cleared the danger, the hosts made some half heasrted handball claims that were swiftly waved away by the referee.
After that slight scare, Flint generally coped quite comfortably with what the Llanrhaeadr could throw at them, and Jacques Welsh and Myles Hart were marshalling the defence very well.
The best chance for a Llanrhaeadr equaliser came on 80 minutes, when substitute Chris Aitkin was allowed a free header, when he met a cross from the right. His goalbound header from about 6 yards out was brilliantly kept out by Chris Sanna, who was making his debut in the Flint goal. Sanna sprung to his left to palm away the ball and protect his clean sheet.
Alieu Sheriff was introduced in the closing stages and his willing runs and closing down of the opposition defenders gave the Flint defence some breathing space, as they saw out the game.

Flint MOM - Brandon Burrows (showed great maturity in the middle of the park, and provided a useful outlet for his team when they were down to 10 men in the second half)