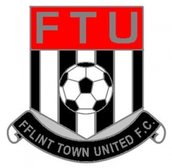 Flint hit their stride as the lights go out on Rhyl

Manager Niall McGuinness' return to his former club Rhyl proved to be a happy one, as his side turned in arguably their best display of the season.

The Silkmen started brightly, and Mark Cadwallader headed against the post on 7 minutes. A couple of minutes later, Brandon Burrows underlined Flint's attacking intent when he struck a 45 yard effort that went just wide of the Rhyl goal.
The home side then started coming more into the game, and a free kick by ex-Flint player Joe Culshaw ended with Reece Fairhurst heading against the cross bar. Shortly after, Aaron Jones pulled off a smart save to deny Aaron Hassell. However, every time Flint moved forward they looked a threat.
Just before the half hour mark, Flint took the lead with a stunning strike from Mark Cadwallader. Kyle Smyth was the provider, sending over a cross, which Flint's top marksman met on the volley to absolutely smash the ball into the net, and give the Silkmen the advantage. Then the lights literally went out on Rhyl, as the game was held up for a short time due to a floodlight failure. The stoppage failed to halt Flint's rhythm and both Kai Wallis and Damien Ketley went close before the interval.
The only downside on the evening for the visitors was another sending off. On this occasion it was Damien Ketley, who was booked on two separate occasions in the second half for diving. He received his second caution with just a few minutes remaining, and by that time Flint were two goals to the good, courtesy of that man Cadwallader again. Ketley supplied a low cross from the right on 58 minutes, that Cadwallader summarily despatched.
That goal arrived at the perfect time for Flint, as Rhyl were trying to exert some pressure to force their way back into the game.
A second successive clean sheet was secured when Aaron Jones pulled off a penalty save just before the final whistle, which had been awarded for a handball in the box.
A tremendous all round team performance on the night, and a well deserved three points for the Silkmen.