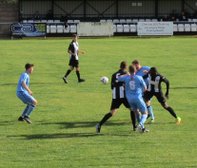 This was the classic game of two halves, as Flint fought back from a 1-0 half time deficit to deservedly equalise and share the points

Conwy were always going to provide tough opposition, as manager Gareth Thomas has moulded a well organised and drilled side, who can also play neat and constructive football going forward, and so it proved as they dominated the first half, and took the game to their hosts, who looked a pale shadow of the side which won at Rhyl in midweek.
Flint were guilty of placing too much reliance on the long ball forward to the two big target men of Andy Brown and Alieu Sheriff, and with no one latching on to any of the flick on's or second ball, they struggled to make any inroads . In contrast, Conwy were playing the ball to feet and knocking the ball around with great confidence.
The visitors went close to opening the scoring on 6 minutes. A free kick was flicked into the path of Bryan Roberts, on the edge of the Flint box, and he hit a shot that clipped the outside of the post. From another free kick on 19 minutes, Dean Seager found himself in space in a dangerous position, but pulled his shot just across the face of goal.
The Musselmen broke to devastating effect on 25 minutes, when they engineered a 2 on 1 advantage. As Jacques Welsh sought to try and hold up Corrig McGonigle, the Conwy forward slipped the ball into the path of the supporting Dean Seager. Although keeper Aaron Jones managed to block the initial shot, the ball bounced back into Seager's path, and at the second time of asking he smashed the ball into the roof of the net.
At the end of the first half, Flint only had an off target Brandon Burrows shot to show for their efforts as they were unable to break down a resolute defence.
A change to playing style was definitely called for, and the introduction of Jake Hampson for the second half transformed the game. His willingness to run at and commit Conwy defenders suddenly gave Flint a potent attacking threat, and they looked a much more dangerous side going forward. On 49 minutes, he broke through the Conwy backline and found himself one on one with keeper Keighan Jones who raced off his line to try and counter the threat. Hampson attempted to lob the oncoming Jones, but didn't quite get his effort right, and the keeper was able to make the save. But at least the home side were now showing they were capable of cutting through the defence.
A few minutes later, Flint broke through again, and had their own 2 on 1 advantage. Unfortunately, Mark Cadwallader slightly overhit his pass to the unmarked Hampson, and by the time the Flint attacker had the ball under control, he was forced wider and from a tighter angle than was ideal, his shot was again saved by Jones.
Just before the hour mark, a long throw by Jack Lewis was flicked goalwards by Richie Foulkes, and all it needed was someone to apply the finishing touch at the far post, but the ball eluded the incoming Cadwallader, and Conwy escaped once more.
The equaliser arrived on 69 minutes, following a free kick awarded to Flint just inside their own half. The ball was played out to Tom Kemp, who had got into an advanced position on the right hand side. He played the ball back into the path of Foulkes, who was in space on the edge of the 18 yard box, and he stuck a sweet low shot that arrowed into the corner of the net.
Having got themselves back on terms, the Silkmen now sensed the chance of victory, and continued to press forward to try and force the issue.
Jacques Welsh popped up in an advanced position on 77 minutes, and delivered a pinpoint ball to Cadwallader, whose header crashed against the upright, much to the relief of the Conwy defence who were, for once, caught flatfooted. Flint had one more good chance to find the winning goal with two minutes remaining, when Hampson received the ball and charged into the area. As he ran in on goal, Jones tried to make himself as big as possible, and he flung his arm out to to block the shot low to his left, and earn his side a share of the spoils.
At the end of the game, Flint were probably left ruing their missed chances to take all three points, having got back on terms, but at half time would no doubt have settled for the point following their low key display in the first period.