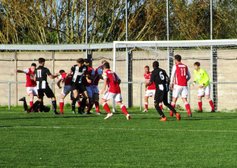 Having lost their goalkeeper through injury with just a minute played, Gresford can count themselves very unlucky not to have got something from the game

The match was halted for 10 minutes, whilst former Flint player Ben Jones received treatment for a head injury suffered following a collision with Jake Hampson, when the Flint forward chased down an early headed back pass, and was unable to stop in time as Jones claimed the ball, and his momentum took him into the Gresford keeper. Suffering suspected concussion, the unfortunate Jones had to leave the game, to a warm round of applause from all sides of the ground. Outfield player Joe Davies deputised in the goal, and had a solid game, distinguishing himself with a couple of good saves, although Flint were guilty of not testing him as much as they should have.
Whether this early incident knocked the home side out of their rhythm or not was hard to tell, but they were very disjointed, especially in the final third, and the visitors had by far the clearer chances to open the scoring.
A rare passage of good interplay by Flint on 8 minutes did create one of their few decent goalscoring opportunities of the first half. Francois Antoine made a good little run, committing a couple of defenders, before slipping the ball to Socrates Martins. He, in turn, played in Jack Lewis who had created an overlap, and cracked in a powerful shot that struck the upright and bounced back out.
On 25 minutes, Gresford were left ruing a great chance of their own, which went begging. A cross from the right found Owen Roberts on the back post, and he headed the ball back across the face of goal to an unmarked Jordan Macarter, who from just 6 yards out was unable to find the target with the goal at his mercy. Then, on 33 minutes, Simon Smith ran onto a ball on the edge of the Flint box, and hit a fierce shot that looked on it's way into the net until Kyle Smyth got in the way to block the effort.
However, from a corner that was conceded shortly after, Flint conceded a penalty, when one of their defenders was guilty of holding a Gresford player in the box. Jack Chaloner's spot kick was brilliantly saved by Aaron Jones, who also foiled a follow up attempt from the rebound.
Flint managed to carve out a half chance on 38 minutes, when Smyth swung over a deep cross from near the right touchline to find Lewis in space coming in from the opposite flank. His diving header was gathered well at his near post by Davies.
Shortly before half time, Roberts got the better of Welsh, and won possession of the ball near the bye line. He then whipped in a low cross than ran across the face of the Flint goal with no Gresford player being able to apply a telling finish.
Brandon Burrows was introduced for the Silkmen in the second half, as they tried to impose themselves more as an attacking force. Hitherto, their final ball had been lacking, as it was all too often either being overhit or else was just a hopeful punt from the back, that was gifting possession back to the opposition.
A trademark Lewis long throw almost broke the deadlock on 50 minutes, when Foulkes met in with a flicked header, that was going in at the far post, until the ball was hacked clear off the line.
Jones came to Flint's rescue on the hour mark, with another top quality save. A poor defensive header went straight to Niall Freeman, who from 20 yards out hit a blistering shot that called the Flint keeper into action, and he responded brilliantly.
It wasn't until the final 20 minutes, that Flint started to exert some real pressure on the visitor's goal. Burrows was probing , and trying to create the vital opening for his side. On 70 minutes, his raking pass found Smyth in space on the right. He run in towards goal, and hit a shot that forced rookie keeper Davies to pull off a good save . Then, shortly after, he dived full length to get down well to a long range effort from Burrows.
When Foulkes beat the Gresford keeper to the ball and set up Mark Cadwallader, for what seemed a certain goal, a somewhat rushed effort missed the target, and it looked as though it wasn't to be Flint's day. However, to their credit they kept plugging away, and were finally rewarded deep into injury time. Davies parried a Smyth shot, as the Silkmen piled on the the pressure. The ball ran to Foulkes, whose close range effort from near the post, just about manged to squeeze through between Davies and his defenders, and across the line, much to the relief and delight of the home supporters, who were finally rewarded for their patience.