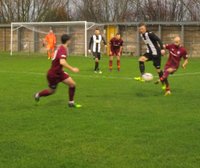 Flint become the first team to clip the wings of Airbus

On a bitterly cold, windswept and blustery day, Flint brought Airbus' impressive 100% record to a halt in a fiercely competitive encounter.

Missing key players Richie Foulkes and Andy Brown, Flint nevertheless set about their task with gusto, in front of a hardy group of spectators who braved the harsh elements to witness a compelling game of football, played in atrocious conditions.
The vital goal came early on in the match, following a Flint free kick awarded near the corner flag on the left. Jacques Welsh produced a telling delivery , that caught on the swirling wind and looked to be heading into the Airbus net of its own accord. But it got held up just short of the line, as the Wingmakers defence did their best to keep the ball out. However, Mark Cadwallader showed great presence of mind to get into the right position to bundle the ball over the line, and put the Silkmen 1-0 up.
A couple of minutes later, Flint could have doubled their advantage, following good interplay down the left between Jack Higgins and Damien Ketley, which resulted in a ball being played into the path of Brandon Burrows who was clean through on goal from about 10 yards out. Airbus keeper Dave Roberts spread himself well, and managed to block Burrows' shot to prevent the goal.
As the half progressed, the game threatened to boil over on a couple of occasions, as it developed into a fiesty affair. In particular, the duel between Flint's Tom Kemp and Airbus' Asa Hamilton looked as though it could get out of hand, as neither player would give an inch to their opposite number. Fortunately, the referee applied a common sense approach in his dealing with the situation, and order was eventually restored to proceedings.
In previous games this season, Airbus have trailed and have hit back to win, so it was expected that the visitors would up the ante in the second half. But they faced a formidable obstacle in the twin centre halve pairing of Sam Hart and Ieuan Hewitt, who were determined to protect their goal at all costs.
On the hour mark, Airbus were awarded a free kick in a dangerous position some 20 yards from goal. Kristian Platt struck a good effort, which Aaron Jones managed to keep out, and as the impressive Curtis Strong attempted to reach the rebound, good defensive cover managed to block his follow up effort.
Chances on goal were at a premium for the rest of the half, as the defences of both sides did well to cope with the difficult conditions and thwart the opposing attackers. On 75 minutes, Luke Blondel saw an effort blocked by Roberts, but the rebound struck Ketley, who was unable to properly control the ball and it spun back off him and towards the goal, but lacked sufficient pace, allowing Roberts to collect at the second time of asking.
As the game moved towards the end of normal time, Flint were starting to look the more dangerous side with their swift counter attacking moves. Blondel got to the bye line, and couldn't quite find Socrates Martins with his pull back, who would have had a simple tap in, if he had succeeded.
After enduring an agonising 6 minutes of added on time, the final whistle eventually sounded to give Flint a hard earned win, that their battling performance fully deserved on the day.