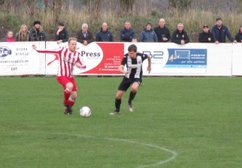 Wellmen come from behind to spoil Flint's Festive Break

Holywell turned around a 1-0 deficit to emerge as 2-1 winners in the Boxing Day derby game, as Flint dropped to 4th in the table.

The opening exchanges were largely subdued in what is normally an intense atmosphere, with both sides struggling to find their rhythm. Holywell employed a high back line, which time and again successfully caught the Flint forwards offside as the game progressed, as they were seemingly unable to time their runs effectively.
The Silkmen took the lead on 19 minutes, following a throw in awarded on the right, about two thirds into the Holywell half. After the initial attempt at a cross was prevented, Kyle Smyth then swung in a perfect cross, that Damien Ketley rose to meet, planting his header into the top corner of the net.
For the next quarter of an hour or so, the Silkmen looked to be comfortably in control, and went close with a couple of long range efforts. First, Brandon Burrows hit a 25 yarder that flashed just wide of the post, and then Jacques Welsh tried his luck with a floated effort that went just over the bar.
On 34 minutes, Ieuan Hewitt hit a tremendous raking diagonal ball that found Burrows in space, as he lost his marker. But Mike Platt was alert enough to race off his line, and came out to meet Burrows on the edge of the box, as the Flint player was unable to lob the ball over the advancing keeper.
Just as it looked as though Flint would be heading into the break with a 1-0 lead, Holywell were handed a lifeline on 43 minutes, that they duly took advantage of. The tricky Aaron Pomeyie managed to keep the ball in just inside his own half, on the right flank. His rescuing of what had seemed a lost cause, then paid dividends, as he ran with it into the Flint half, before cutting inside, evading two half hearted challenges, before slipping a perfectly judged ball into the path of Steve Lewis, who was through on goal, and slotted it past Aaron Jones to restore parity to the scoreline.
From the restart, Flint went on the attack, and as Ketley looked to make inroads into the opposition box, he appeared to be caught from behind, but the referee saw things differently, and booked the Flint player for diving.
In the second half, Mark Cadwallader looked the player most likely to beat the Wellmen's offside trap, with his runs from an advanced midfield position causing problems for the home side's defence. However, having got themselves back into the game, Holywell had a renewed sense of self belief, and were starting to win the 50:50 balls in all areas of the field, giving them the upper hand in terms of possession.
On 47 minutes, Cadwallader got free, and though slightly off balance, managed to hit a decent shot, that caused Platt to pull off a fine save, to keep the scores level. Then. shortly after, he surged down the left, before cutting back in on himself, and hitting a quickfire shot which he hoped would catch Platt unawares with, but once again the Holywell keeper denied him by diving at full stretch to make the save.
The decisive goal arrived just before the hour mark, following a corner. First, Matty Hughes rose unchallenged and thumped his header against the bar, but Flint's relief was only temporary, as Jon Jones was following up, and nodded the rebound over the line from close range.
The Wellmen then collectively shut up shop, and successfully stifled Flint. It was only as the game was entering the final 10 minutes, that the sense of urgency finally propelled the Silkmen into carving out another couple of decent chances. Captain Sam Hart made a good run out of defence on 80 minutes, before finding Jake Hampson with a good delivery. Hampson's pace pulled him clear of the defender, but his low shot was too close to Platt, and once more the Holywell keeper was able to pull off the save. Then, with five minutes remaining, Cadwallader once again made a telling run through the home defence. He chose to shoot from an acute angle, but if he had looked up a better option may have been to pass to the unmarked Alieu Sheriff in a central position, and yet again Platt was on hand to deny Flint's top goalscorer.

Flint MOM - Mark Cadwallader (was Flint's most effective attacking outlet, especially in the second half)