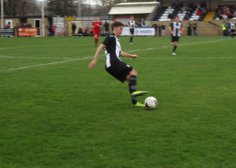 Smyth's superb solo goal rescues a point for the Silkmen

The game was illuminated by an excellent individual goal by Kyle Smyth, as Flint fought back from a goal down.

After a turgid first half, during which the only decent effort on either goal was Pat Hinchcliffe's well struck half volley which went just wide for the visitors, the second period, thankfully, was more incident packed.
Denbigh took the lead in the 49th minute. A cross was swung over from the right onto the head of the dangerous Mark Roberts. His effort was initially well blocked by Aaron Jones in the Flint goal, but Roberts reacted quickest to the loose ball as it bounced off the keeper, and had a simple tap in to put his side 1-0 up.
Just a few minutes later, the visitors shot themselves in the foot, when Scott McHarrie was dismissed for an off the ball incident, when he appeared to kick out at a Flint player.
However, it was Denbigh who had the next good chance. Roberts made a good break down the left, and the move ended with the ball being played to Hinchcliffe who was positioned centrally just inside the box. His well hit shot brought a good save from Jones.
Kyle Smyth took matters into his own hands in the 58th minute, when he embarked on a run down the Flint right, that took him into the opposition box. Once in the 18 yard area, he dodged and weaved around a couple of challenges, doing well to stay on his feet, before finding himself in front of goal about 8 yards out,and rifling a shot past Craig Vernon into the Denbigh net. That should have been the catalyst for Flint to go on and impose themselves against the 10 men, and secure the 3 points, but unfortunately it wasn't to be. The visitors regrouped, and were proving to be a solid obstacle to overcome, with their captain, Tony Davies being a formidable presence in the heart of their defence, and Roberts always looking to hurt Flint on the break, when given the opportunity.
Good work by Alieu Sheriff on 73 minutes, won back possession for his side, and set up a good attack for the Silkmen, which saw three players break into the box. Sheriff had found Kai Wallis, who in turn passed to Mark Cadwallader. With Luke Blondel overlapping on the left, Cadwallader played the ball into his path, but the forward's effort was blocked by Vernon, who had come rushing off his line to narrow the angle.
Then, a minute later, Denbigh created a good chance of their own. Roberts galloped down the left, delivered an excellent low cross, and Jacques Welsh had to put in a last ditch interception in front of his own posts, to divert the ball out for a corner and prevent a certain goal. From the corner, Lewis Sirrel headed the ball inches over the Flint bar.
With the game into the final 10 minutes, some good interplay by Flint saw them carve out another chance, when Cadwallader fed Smyth in the box, but his instinctive shot was well blocked by Stuart Vernon. From the resulting corner, Flint gifted away possession when a short corner routine went horribly wrong. Once again it was that man Roberts who broke away for the visitors. After successfully riding a challenge, he was through on goal, advancing from the left touchline, and hit a good effort that just crept wide of the far post, much to the relief of the home side.
As full time approached, Denbigh had the last say, when a Jordan Barrow free kick sailed just over the bar.