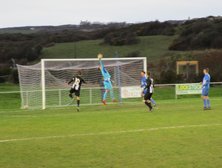 Flint looked the more dangerous side in the opening 20 minutes or so, with Mark Cadwallader and Richie Foulkes going close with a couple of half chances. Then, just before the half hour mark, Kyle Smyth picked up where he left off last week, when he struck an excellent goal that put the Silkmen 1-0 up. A good passage of play down the left, resulted in Andy Brown laying the ball off to Smyth, who received it some 25 yards out, looked up and picked his spot in the top corner, giving Carl Jones no chance in the Holyhead goal.
Before the Harbourmen could clear their heads, Flint struck again on 32 minutes. This time Smyth turned provider, with a great ball that cut through the Hotspur back line, that Luke Blondel latched onto, and from the angle of the 6 yard box despatched it past Jones into the net.
The Silkmen were now rampant, and the Holyhead players' heads had dropped, and their cause was worsened when Flint were awarded a penalty on 38 minutes, when Smyth went down following a challenge. Foulkes stepped up to do the honours from the spot and make it 3-0.
The half got even better for the visitors on 44 minutes, when a n accurate through ball from Brandon Burrows released Brown through on goal. Jones did well to parry the initial shot, with the ball going out wide. But Brown wasn't quite finished, and raced onto the loose ball, before finishing well from a tight angle.
Following the avalanche of goals in the first half, the second period was always likely to be something of an anti climax for the visitors, and the home side got off to a flying start with just a minute on the clock. Possession was lost near the halfway line, as Rees Brown put in a robust challenge to win the ball. He then spotted Mel McGinness make a great run through the middle and played the ball into his path. Sam Hart desperately tried to make up ground from the left back spot and cover the danger, but McGinness had too much of a head start and calmly slotted home from 18 yards out.
Holyhead did their best to mount an unlikely comeback, and for the next quarter of an hour or so, mounted a series of raids into the Flint half, but Aaron Jones was alert to the danger, and was on hand to race off his line and clear any through balls or else comfortably claim any balls played into his six yard box.
Foulkes served notice that Flint were still dangerous as an attacking force on the hour mark, when, following a corner, the ball was cleared to him on the edge of the 18 yard box, and he let fly with an effort that sailed narrowly wide of the post.
Flint generally kept their opponents at arms length for the remainder of the game, although Hotspur had a rare sight of goal on 87 minutes, when Kenleigh Owen hit a piledriver that Jones diid well to keep out, and preserve his side's three goal advantage.