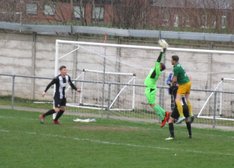 Penrhyncoch put in a brave, attacking display, especially in the second period, but Flint dug in to claim the three points

The relegation haunted Roosters could have been forgiven for adopting an ultra defensive approach, and hope to nick something on the break, but to their credit, from the off, they showed their attacking intent, forcing a couple of early corners in the opening minute or so, which Flint keeper Aaron Jones did well to field.
When Flint settled into their stride, they began knocking the ball about with great authority, and Brandon Burrows was especially impressive in midfield, pulling the strings, and setting the tempo for the team.
On 21 minutes, he was instrumental in breaking the deadlock, as the ball as fed out to him on the left. He attacked towards the bye line and delivered a cross just under the cross bar of the visitors. Leigh Jenkins stretched to claim the ball, and as he fell backwards onto the goal line, his grip loosened, and Andy Brown was on hand at the far post to get a vital touch to force the ball over the line, as Jenkins desperately tried to recover.
Flint were now enjoying plenty of possession, but despite their best efforts were unable to breach the visitors goal for a second time. Kyle Smyth came closest, when on 28 minutes he unleashed a long range effort, after brown had pulled the ball back into his path. But the shot went just wide of the upright.
Penrhyn had a sight of the Flint goal, a couple of minutes later, when John Foligno met a corner with a header, but his effort lacked sufficient power, and Tom Kemp, stationed on the goal line, had a relatively easy clearance.
The second half was barely a minute old, when another corner for the visitors yielded much better results. Jonathan Evans rose unchallenged, and powered his header past Jones, to put the Roosters back on terms.
Flint's response to this setback was almost instantaneous. They won a free kick just outside the 18 yard box, on the left, and Jake Hampson provided a nice delivery onto the head of Mark Cadwallader, who directed the ball just inside the far post.
A few minutes later, Cadwallader could have added to his tally, when first he was unable to turn a cross from Smyth into the net, and then shortly after, when Jenkins fumbled a Brown shot, he followed in, and lifted the ball over the stranded keeper but also over the bar.
Thereafter, the game started to become a midfield battle, as both sides tried to assert control, but only really succeeded in cancelling one another out. There was always the danger from a Flint point of view, that their inability to establish a two goal lead could prove costly.
And so it almost proved on 63 minutes, when Evans broke through the Flint defensive line, but blazed his shot high over the bar.
Cadwallader had the ball in the net again on 68 minutes, when he beat Jenkins to a cross and headed in, but his joy was short lived as he was ruled offside.
Flint then protected their lead and saw the rest of the game out, although Penrhyn will be pleased with their overall performance in the game, if not the final result, and if they can replicate this type of form over their remaining games they will give themselves every chance of escaping relegation.

Flint MOM - Brandon Burrows (was the heartbeat of the team, especially in a commanding first half display)