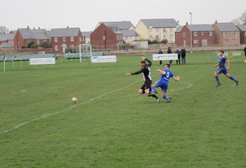 Any faint hopes Flint still had of being in the title hunt were surely dealt a fatal blow at a rainswept Ruthin, when they were held to a draw.

Despite the hosts being reduced to 10 men after just 11 minutes, Flint failed to take advantage of the situation, and at half time found themselves trailing 1-0 as Ruthin confounded the odds and deservedly led at the break.
The home side laid down a marker after 5 minutes, when from a long range free kick played into the Flint box, Gwion Owen received the ball in space on the right, and fired in a shot from a tight angle , that Aaron Jones did well to block on his near post.
A few minutes later, following a free kick on the right, Gwydion Ifan had a clear sight of goal from 6 yards out, but shot straight at Jones, who gathered comfortably.
Then came the main talking point of the half on 11 minutes, when Andy Brown looked to have broken clear, but was felled from behind just outside of the box. The referee issued a straight red to the offender, Tom Dyer, as he was the last man, although whether Brown would have reached the loose ball was debatable as it was running away from him.
If anything, this setback only seemed to spur Ruthin on, as it was they who looked the most likely to score for the rest of the half. They were having great success in playing long diagonal balls in behind the Flint full backs, and getting runners on the end of them. In contrast, Flint were very one dimensional, didn't really change their formation or tactics, and seemed content on playing the long ball up to Brown. Trouble was, it was too often over hit, or when it did find its target, there was no-one within 20 yards to get on the end of the knock down.
Hesitancy in the Flint back line almost proved costly on 23 minutes, when Tom Williams ghosted in to reach a diagonal ball. Jones came out to meet him, and the Ruthin player hit his shot through the Flint keeper's legs but into the side netting. Then, on 37 minutes, Ryan Jones demonstrated good ball control to jink his way into the box, before hitting his effort just wide.
Five minutes before the break, Ruthin took the lead. Ifan made a surge into the box, and his run was blocked by a combination of Jake Hampson and Brandon Burrows converging on him. As he tumbled to the ground, the referee awarded a penalty. Captain Ilan Hughes took responsibility and sent Jones the wrong way from the spot.
As the half time whistle blew, Ruthin keeper Ryan Goldston probably couldn't believe his luck, as he didn't have a single save to make, despite his side being a man down. A change was clearly called for if Flint were to get back into the match, and for the second half they adopted a different formation, with Brown moving out to the left flank, and Hampson high up on the right, as they sought to use the wings to their advantage.
This more attack minded approach, which also encouraged the central midfielders to get up and support the attack, almost paid dividends early on in the second half, when Ged Kinsella won the ball in an advanced position and passed to Mark Cadwallader. The Flint forward controlled it on his chest then hit a crisp shot that forced Goldston to pull off his first serious save of the game. The Silkmen were now starting to look like a much more dangerous outfit going forward, and began working the Ruthin keeper much more. On the hour mark, Richie Foulkes got his head to a corner from close range, but his effort clipped the top of the bar as he just couldn't get over the ball enough to get it on target.
The equaliser arrived on 68 minutes, when from a Jake Hampson in swinging corner from the right, Brown rose highest in a crowded box to head home at the far post.
To their credit Ruthin regrouped and started to counter the Flint threat. Their top scorer Llyr Morris was introduced from the bench and looked dangerous on the break, although Jacques Welsh was by and large marshalling him well, and matching him stride for stride.
Right at the death Flint could have won it, as Luke Blondel battled well to get sight of goal, and crashed a shot against the bar. But it wasn't to be, and so Flint had to be content with a point, which on the balance of play, was a fair result.

Flint MOM - Jacques Welsh (a composed display at the back, and he handled Ruthin dangerman Llyr Morris well when their top scorer was introduced into the game)