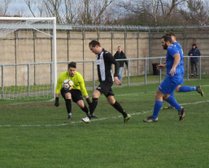 Flint moved up into second place in the table, following this 2-1 victory

Once again they had to rely on a stronger second half performance, after putting in an unconvincing first half showing, that saw them trail 1-0 at the break.
Although they started off brightly, putting together a few nice passing moves that contained Llanrhaeadr within their own half for the opening ten minutes, once they had fallen behind to a swift counter attack from the visitors, they struggled to regain their earlier momentum, and their slow paced attack was easily countered for the remainder of the first period.
With 3 minutes on the clock, a nice interchange of passing resulted in Brandon Burrows piercing the visitor's back line with a deft little through ball that found Mark Cadwallader, and had him through on goal. Keeper Jimmy Haynes raced out to the edge of his 6 yard box, and managed to pull off a good save from close range as Cadwallader was unable to find a way past him.
Flint continued to press during this opening spell, but couldn't quite unlock the door of the packed Llanrhaeadr defence. Then, on 12 minutes, they were caught completely cold by the pace of Iwan Matthews, who sprinted onto a long ball. With the Flint defence appealing for an offside flag that didn't come, Matthews galloped into the area and calmly slotted past Aaron Jones, to give his side the lead.
Matthews was to prove a constant thorn in the side of the Flint defence for the rest of the game with his intelligent running. On 20 minutes, he was in the thick of the action once again, with the ball at his feet inside the Flint box. As several defenders closed him down, the ball found it's way to strike partner Tomos Evans. whose curling effort struck the Flint post, to give the home side a let off. Then, following a corner on 22 minutes, player manager Marc Griffiths struck a header which Jones just about managed to keep out, after indulging in a spot of ball juggling as he tried to gain control of it.
By this point Flint were very much second best, and struggling to make any impression in the game. One brief moment of hope came on 36 minutes, when Cadwallader hit a shot from the edge of the box, that Haynes failed to gather at the first attempt, and with Burrows arriving the ball was just about cleared in the nick of time.
Not for the first time in recent weeks, the situation called for a much stronger second half showing from the Silkmen, and once again they responded.
On 46 minutes, Richie Foulkes directed a header goalwards from a corner, which beat Haynes but not the defender stationed on the line, who cleared the danger. But a couple of minutes later, another header had a completely different outcome. From a Jake Hampson free kick, new signing Dimitri Christou marked his debut with his first goal for the club, when his bullet header rocketed into the net.
Flint were now looking a much more potent attacking force, and had the bit between their teeth, although Llanrhaeder continued to pose a threat themselves whenever they ventured forward, with that man Matthews being the main danger. Flint keeper Jones had to be at his very best to deny him on 53 minutes, when pulling off an excellent save from Matthews' header.
The crucial second goal for Flint arrived a couple of minutes later, when Kyle Smyth drove a shot on target from distance. It proved too hot to handle for Haynes and Cadwallader reacted quickly to pounce on the loose ball and slot it home.
Smyth made one of his trademark mazy runs into the box on 65 minutes. As he was being closed down, he double backed on himself, completely wrong footing the defenders, and opening up space, before hitting a fierce shot that Haynes did well to parry. Burrows then tried a follow up effort, but to his credit Haynes recovered to complete a great double save.
Jones made a brave save at the feet of Griffiths on 70 minutes, dealing with a low ball played across the box. However, he injured himself in the process, requiring a lengthy spell of treatment. Play was then restarted with a bounce ball, just 8 yards from the Flint goal, that Llanrhaedr decided to contest, which sparked off some interesting verbal exchanges ! Flint survived this bizarre moment and cleared the ball to safety.
Matthews tried his luck from the edge of the area on 74 minutes, with a shot that clipped the Flint bar.
There was a flashpoint of 82 minutes, when Burrows was the victim of a heavy challenge by Joe Vaughn on the touchline, which he took exception to, and retaliated by kicking out at his opponent. Whether or not he actually made contact was difficult to tell, but the intent was enough for him to be shown a straight red card. Vaughn received a yellow card for his initial challenge.
Down to 10 men, Flint were able to see out the remainder of the game reasonably comfortably, and indeed could have increased their lead on 85 minutes. Cadwallader made a great run to the bye line, then headed along it towards the goal, before slipping the ball into the patch of Luke Blondel, who from only 4 yards out, miscued his effort and screwed the ball wide.