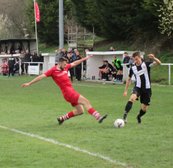 In front of a very healthy crowd at Globe Way, Buckley exacted revenge for their defeat at Cae-y-Castell earlier in the season, with a 2-1 win

In the opening minutes of a game played in a frenzied atmosphere befitting of a derby game, the Stags raced out of the blocks, and almost caught Flint napping from the kick off. They attacked down the left, and Adam Eden raced clear and cut in on goal, only to drag his shot wide of the target. With Flint still trying to find their shape, the hosts took full advantage on 5 minutes, this time the attack coming down the right. Aron Williams received the ball just inside the box wide on the right and produced a deft lob that sailed into the Flint net.
After this early onslaught, the Silkmen began to find their feet and started probing for an equaliser. On 10 minutes, an attack down the right led to Kyle Smyth getting in a shot that Buckley keeper Joe Makaruk did well to block. Then, on 18 minutes, Flint's top goalscorer Mark Cadwallader was put through on goal. As Makaruk came out to meet him, Cadwalalder chipped the ball over the keeper, but excellent covering by Callum Humphries meant that he got back in the nick of time to clear the ball off the line.
Flint were now starting to enjoy the bulk of possession, but long throws and crosses into the box only succeeded in finding the heads of Humphries and his defensive partner, Chris Roberts, who were providing an effective and excellent shield in front of Makaruk. Buckley always had an outlet in the pairing of Eden and the impressive Williams, who with their pace posed a dangerous threat to the Flint rearguard.
The second half carried on in much the same vein as the first half had ended, and despite their possession and pressing, Flint were unable to fashion any decent clear cut chances. A Buckley break on 65 minutes almost paid dividends for the home side, when a cross to the far post from the right found Luke Blizard who was one on one with Aaron Jones in the Flint goal. Somehow, Jones managed to pull off an unorthodox save with his legs to deny the Buckley striker the goal. Them, a minute later, Humphries who had gone forward for a corner, headed onto the bar, as Flint rode their luck.
In the 76th minute, a Buckley break did prove to be decisive, as Williams once again raced down the right. Nobody in a Flint shirt tracked the run of Roberts who calmly ran down the middle and was bearing down on the goal, when Williams' pinpoint delivery found him, and he sidefooted home into the net.
Flint did manage to create a couple of decent chances as the game entered the final ten minutes, and should have taken at least one of them. First, Smyth delivered a cross to the far post onto the head of Richie Foulkes, but his effort struck the back of a Buckley defender, and the ball went out for a corner, when a goal had seemed inevitable. Then, a minute later, Dimitri Christou had a great chance with a close range header, but he could only direct it into the grateful arms of Makaruk.
With two minutes of normal time remaining Flint were offered a slight hope of salvaging something from the game, when the hard working Ged Kinsella was brought down in the box as he challenged for the ball. Foulkes converted the spot kick with his usual aplomb, but time was against the Silkmen, and they were unable to create another worthwhile opening in what remained.

Flint MOM - Ged Kinsella (was continually driving his side on with a high octane, industrious performance)