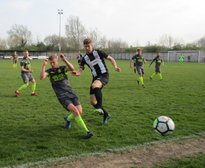 Flint's Flawless First half show paves the way for victory

Having shipped two goals, Guilsfield's task became that much harder on the stroke of half time when Callum Bromley was sent off after brandishing an elbow into the face of Ged Kinsella. To their credit, they regrouped in the interval, and the second half was a much more even affair, but by then the damage was done, as Flint had turned in an inspired first 45 minutes.
In the opening 15 minutes, the Silkmen enjoyed most of the play, but only had a couple of half chances to show for their superiority, with a shot from Richie Foulkes from outside the box, after he had run with the ball into space to create the opening, and then a Kyle Smyth effort.
But in the 19th minute they took a deserved lead following some slick play by Andy Brown. He raced down the right, outpaced the defender, and delivered a pinpoint cross to the far post, that Mark Cadwallader comfortably headed home. Brown almost got on the score sheet himself a few minutes later, but his header just cleared the bar.
Flint doubled their advantage on 29 minutes, thanks to Dylan Allshorn showing good presence of mind to get in an advanced position, and being in the perfect place to slot home a cross from Cadwallader, as the Guilsfield defence were caught napping.
Brown pounced on a loose ball in the area, as the game approached half time, and hit a shot that just cleared the bar. Almost the last action of the half saw Guilsfield reduced to 10 men, as Bromley received his straight red card after lashing out at Kinsella.
Unfortunately, the second half was something of an anti climax, as Guislfield offered much sterner resistance despite being a man short. Indeed, they almost pulled a good back straight away, as Jake Cook briefly got free and ran into the Flint box. However, Tom Kemp did well to get back at Cook and managed to dispossess him before he could get a telling shot off.
On 50 minutes, Brown showed great desire to win possession of the ball, and raced to the angle of the six yard box, but was unable to crown the moment with a goal, as he lifted the shot over the bar.
Jacques Welsh had to be at his best as the second half wore on, as Guilsfield sought to get back into the game, especially as he lost his defensive partner Dimitri Christou to a tight hamstring. But by and large, with the support of the rest of the back line, he was effective, as Aaron Jones was not called upon to make a serious save. The Guils' other offensive weapon was the long throw technique of Chris Cathrall, but again Flint dealt with this threat reasonably comfortably as Foulkes and Brown used their height effectively to deal with the danger. At the other end, Cadwallader was working hard for his team, holding the ball up and looking to bring other players into the game, but Flint were not over committing, having earned the two goal cushion.