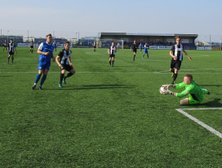 Flint were dealt a blow shortly before kick off when goalkeeper Aaron Jones was declared unfit, and Joe Davies, who had played in goal at youth level, went in between the sticks.
Despite this setback, the Silkmen started brightly and in the opening 10 minutes both Andy Brown and Dylan Allshorn went on surging runs into the opposition half, but were unable to deliver a final telling ball. Airbus sought to take advantage of Flint's goalkeeping situation, and tried their luck with a couple of long range efforts, but Davies was equal to the task and dealt with them comfortably.
The Wingmakers' Brady McGilloway was being afforded too much space down the right, and was posing constant problems to the Flint defence. On 15 minutes, he got himself free in the box, and met a cross from the left, but headed wide with the goal at his mercy.
Flint put together a nice move on 25 minutes, and following a sharp exchange of passes, Foulkes set Allshorn free on goal. His first time shot from wide on the left just cleared the bar.
On the half hour mark, Nathan Woolfe struck a free kick from 22 yards out, and Davies was called upon to touch the shot over the bar.
At half time it remained goalless, with nothing much to choose between either side.
Davies had to be alert at the start of the second half, as he was called upon again to pull off another decent save from a free kick.
On 51 minutes, Ged Kinsella struck a well hit shot from just outside the box, that Airbus keeper Dave Roberts collected safely. Flint continued to press, and just after the hour mark, Kyle Smyth let fly with a 25 yarder that crashed against the bar. Then, on 65 minutes, a glorious opportunity was squandered. Smyth delivered an excellent ball from the right, that took Roberts out of the game. Jake Hampson met it, but his effort was blocked, only for the ball to fall invitingly at the feet of Dimitri Christou who was centrally placed just 7 yards out. Somehow, he contrived to blaze his effort over the bar with the goal seemingly at his mercy.
That miss was to prove costly for Flint, as Airbus took the lead on 70 minutes. Matty McGinn had moved up in support of a forward move, and collected the ball which deflected into his path, before striding forward and unleashing a well hit shot into the bottom corner of the net, giving Davies no chance.
Flint refused to lie down, and sought to get back on terms. On 75 minutes, Smyth picked out Kinsella, who reacted well to get away a shot that forced Roberts into action, as he fingertipped the effort over his bar.
Then on 88 minutes, another golden chance was wasted by the Silkmen. Mark Cadwallader won possession, and slipped the ball through for Christou to run onto. His touch put it into the path of Luke Blondel, who had recently joined the action from the bench. He got the benefit of an offside decision, but could only direct his effort wide of the post, when it looked as though he was certain to put Flint back on terms.
Once again Airbus made the most of their let off, by doubling their advantage on 90 minutes, when Nathan Woolfe was allowed too much space to comfortably pick his spot. Flint's misery was compounded when Joe Chaplin broke free deep into added on time to make it 3-0.
A clinical display of finishing from the Champions being the difference between the two sides on the day.

Flint MOM - Kyle Smyth (was instrumental in some of Flint's best attacking moves, and deserved more reward for his perseverance)