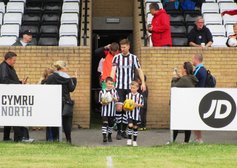 Rhyl secured an opening day victory for the first time since August 2012 with a 2-1 victory at Flint Town United to start the JD Cymru North season. The win was overshadowed by a serious injury to Matthew Cook and all at Rhyl FC and Flint Town Utd wish Matthew all the very best for his recovery.
The opening exchanges of the game were lively between two sides expected to be competing at the business end of the league this season but for Rhyl the afternoon got off to a disappointing start. A throw in from the Flint right was able to be knocked across the six yard box without being cleared to enable ex Lilywhite Mark Cadwallader to head home from close range to claim his customary goal against his former club.
Shortly afterwards a challenge in midfield saw a clash with of legs with Matthew Cook falling to the ground and whilst play was allowed to continue with the player in anguish a well timed challenge from Danny Sullivan prevented Flint with a chance to double the advantage. When the play was eventually stopped a lengthy delay saw Cook carried from the field and replaced by Tom Creamer.
Both sides pressed on and the first real chance for Rhyl fell to Sam Molyneux who saw his shot saved by Aaron Jones in the Flint goal. Mark Cadwallader had a chance to claim his second in the 19th minute but Keighan Jones denied him.
Flint created long range chances which failed to worry Jones whilst the Lilywhites gradually began to gain control of the game. Their reward came in the 32nd minute when a Dave MacIntyre cross was half cleared by the home defence but the ball fell to Steve Thomas and he applied a sweet half volley finish to leave Aaron Jones with no chance as the shot nestled in the bottom right corner of his goal to bring the sides level.
The second half saw Rhyl take a hold of the game as they reduced the opportunities for the hosts whilst creating the clearest opportunities. Good work from Cai Owen saw a cross played across the box but Sam Molyneux was unable to take advantage of the opportunity. Alex Titchiner had a chance in the 51st minute before sub Tom Creamer had a header cleared from the line after a shot was blocked. As Rhyl pressed on the referee James Walker ignored fierce protests after a Cai Owen shot was blocked by a defenders arm in the box in the 62nd minute.
Tom Creamer saw a shot go narrowly over before a break down the Rhyl left saw Sam Molynuex descend on the goal but Aaron Jones was able to deny the opportunity.
Aaron Hassall was introduced in the 74th minute and he immediately had an impact on the game. He won a free kick approximately 30 yards out as he protected the ball. His free kick was curled low into the box and as Danny Sullivan beat the offside trap the keeper was torn between reacting to the cross and the onrushing Sullivan and was unable to prevent the ball going past him into the net.
The last 12 minutes saw .the Lilywhites successfully play out the remainder of the game with a balance between keeping possession without becoming stretched at the back. Sub James Murphy and Asa Hamilton provided outlets for the Lilywhites as they were able to control play to ensure a first opening day win since their 2012-2013 title winning season.