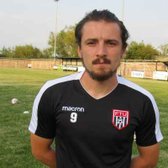 The game started with Flint on the attack, but a quick break by the visitors on 5 minutes caught Flint flat footed when Rob Jones collected a loose ball on the edge of the 18 yard box, but hit his shot just inches wide of the post. Flint came back 2 minutes later after a fine run by Nathen Brown on the right wing where he managed to get to by line before crossing to Danny Andrews but hit his first time shot over the bar.
Flint took the lead in the 14th minute when a Nathan Brown free kick found Tony Davies at the far post where he was forced to the bye-line, but a clever back heel across the goal left the Conwy defence in panic. As they tried to clear their defence Andy Brown made the most of the confusion by smashing the ball into the back of net from three yards. Conwy’s best chance game in the 20th minute when Corrig McConigue hit his shot against the inside of the post, the ball travelled to the other side of the goal where Liam Morris came running in and with the goal at his mercy hit his shot straight at the post. Conwy were back level 4 minutes later when a long high ball was cleared out of their defence into the Flint’s half. Flint’s defence having gone up to support the forwards only to find the ball going over their heads, Flint keeper Aaron Jones came racing out of his goal but unfortunately the ball bounced over his head where Corrig Conigle was able to collect the ball and tap into an empty net. Flint took a 2-1 lead in the 40th minute when a cross from the left found the Conwy defence asleep leaving Mark Cadwallader to head home at the far post from 2 yards.

Flint came out the second-half looking to increase their lead and 3 minutes into the second period Alex Titchiner raced clear of the Conwy defence to feed Brandon Burrows, who made no mistake from 10 yards. Flint were now in control of the game but were undone 10 minutes later by ex Flint player Rob Jones who’s first time shot evaded the outstretched arms of Flint keeper Aaron Jones. Two minutes later Flint were back in the driving seat, when a very poor back-pass left visitors keeper Ben Heald in two minds and the ever alert Alex Titchener raced between both players to take the ball around the stranded Heald and tap home into an empty net. Back came Conwy and with 4 minutes of play left, Rob Jones broke into the penalty area when he was brought down. The resulting penalty was neatly put a away by the impressive Corrig McGonigue.

Flint’s Man of the Match was Alex Titchener who was causing the visitors defence all sorts of problems.
.