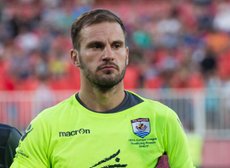 Flint again took an early lead when Andy Brown turned in a cross from Mark Cadwallader inside the six yard box. Flint held on till 42 minute when Emmannuel Agyemang equalised after immense pressure from the host’s. Two minutes later Flint went in front after Richie Foulkes managed to reach the ball before the keeper could get his fist to it and headed into the back of the net. The referee singled a goal and has they all turned back to the centre the goal was disallowed on the decision of the linesman, who somehow saw an infringement on the keeper, which nobody else had seen.
The second half was one way traffic as the host’s increased their pressure on the Flint goal only to find John Dandy in brilliant form has he off pulled save after save picking up Flint’s Man of the Match.
Share via
FacebookTwitter
https://www.pitchero.com/clubs
Recent news