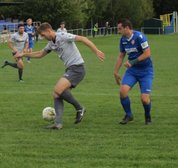 Flint get back on winning track

Having gone down by the odd goal in five last weekend, Flint made amends by claiming a 3-2 win of their own against a dogged Llanrhaeadr side.

Skipper Richie Foulkes was pushed into a more advanced role, and his link up play with Mark Cadwallader was one of the reasons Flint were on the front foot from the off, and were taking the game to their hosts. Indeed it was this combination that crafted the opening goal for the Silkmen on 15 minutes. Foulkes controlled a long ball, and with his back to goal, laid the ball off into the path of Cadwallader, who calmly slotted home to add another goal to his already impressive haul this season. Prior to that, Flint had already gone close on a couple of occasions, firstly when Foulkes fizzed a free kick over the bar, and then when Chris Li hit a long range drive that Llan keeper Jimmy Haynes blocked, with the ball going back out to Li, but his follow up effort flew just wide of the target.
On 21 minutes, Callum Bratley showed good purpose in getting to the bye line and delivering a telling cross, which Kyle Smyth met, but his header thudded back off the crossbar.
Following a corner on 34 minutes, Llanrhaeadr drew level, with what was their first serious effort on goal. The ball was delivered to the back post, and Matt Evans rose highest to power his header into the back of the net. That goal gave the home side the impetus they had hitherto lacked, and with the bit between their teeth they took the game to Flint for the remainder of the half. Despite a few jittery moments in their defence, the Silkmen weathered the storm and it remained 1-1 at half time.
With the game evenly poised, Alex Titchner drove into the box on 52 minutes. As the Llan defence tried to close him down, the ball found its way to Foulkes, who in turn slipped it into the patch of Bratley who applied a smart finish to restore Flint's lead. But two minutes later, the hosts were back level, when a cross was swung over from the left. and Joe Vaughan outjumped Li, in what was a bit of a mismatch, to plant a firm header into the back of the Flint net.
Flint were not to be deterred, and stuck to their task. They were rewarded in the 70th minute, when a Brandon Burrows drive was blocked on its way to goal by the arm of Khyam Wyton. The referee instantly awarded a penalty and decided that the offence warranted a straight red card. Having seen his spot kick saved the week before, Foulkes again took responsibility and kept his cool to score what was to prove the decisive goal.
Llanrhaeadr attempted a late rally to try and salvage a point, but the Flint defence, well marshalled by Tony Davies, held firm, although in the final minute, substitute Marc Griffiths went close with a header that finished on the roof of the net.
Following last weekend's home reverse, this was exactly the response that manager Niall McGuinness was looking for, and we can look to build on this on Tuesday evening when we welcome Ruthin Town to the Essity Stadium (kick off 7-30pm).