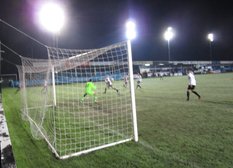 Backs to the Wall performance earns Flint a vital win

The gap to leaders Prestatyn is now down to just 2 points following this victory, but Flint had to do it the hard way, having been reduced to 10 men for an hour

Two rash challenges by Chris Li , both of which merited a booking, meant that Flint were faced with an uphill task, having taken the lead after just two minutes thanks to a clinical Callum Bratley finish. Fortunately, a gutsy performance by his teammates, combined with some poor finishing by Rhyl's forwards meant that Li's indiscretion was not to prove costly for the Silkmen on this occasion.
The only goal came when Brandon Burrows floated a ball down the right to Bratley, who managed to get the better of his defender and cooly slotted home beyond Rory Crowther in the Rhyl goal.
Having got the advantage of the early strike, Flint were looking quite comfortable, with Richie Foulkes dominating the midfield exchanges. On 28 minutes, a good passage of play resulted in Alex Titchiner crossing to Nathan Brown, whose on target effort brought a save from Crowther. Shortly after, Rhyl posed their first threat of the game, as James Murphy was released down the left and cut inside to hit a shot that brought the best out of John Danby in the Flint goal, as he blocked the initial effort and then pounced upon the loose ball as Murphy loomed large to try and gobble up the rebound.
Then, a couple of minutes later, came Li's aberration, as he inexplicably flew into a needless full blooded challenge in the middle of the park, despite being on a yellow card following a similar incident some 15 minutes beforehand. He left the referee with little alternative but to issue a second yellow card.
The hosts were then given the boost of playing with an extra man for the lion's share of the game, and their numerical advantage led to them putting pressure onto the Flint goal in the closing stages of the first half. First, former Silkman Arek Pikorski had a stooping header that he could only direct into the arms of Danby, and then Sam Molyneaux missed an open goal from 6 yards out as Flint rode their luck.
Danby was called into action again on 53 minutes, when Danny Sullivan unleashed a long range effort, but the Flint keeper was equal to the test, and tipped it over the bar.
From that point on, as much as Rhyl huffed and puffed, Flint more than stood up to the challenge, with John Davies and Jacques Welsh putting their bodies on the line to defy the Lilywhites attackers. Titchiner, once again, was tireless in his running and closing down, and Brandon Burrows followed his lead, and showed great maturity and composure in his use of the ball.
Bratley went close to increasing the lead on the hour mark, with a double chance, but both efforts were blocked.
With just under 20 minutes remaining, Flint were forced into making their final substitution, when Kyle Smyth was forced off with an injury. This necessitated a change to the defensive line up, with Tom Kemp switching to right back, and Danny Andrews coming on and having to fill in as an emergency left back, a role he performed admirably.
Flint had a couple of good chances to wrap things up in the last 10 minutes. First, following some good possession play on the left, Bratley lofted a ball onto the head of Brown, but from a good position the big centre forward could only find the hands of Crowther with his effort. Then, a few minutes later, Kemp won possession on the right, advanced with the ball and delivered a perfectly weighted pass into the path of Bratley, but the Flint hitman was denied by an excellent save from Crowther.
The frustration of the Rhyl players was now beginning to show, as they were unable to make inroads, and on 85 minutes, they too were reduced to 10 men, as Cai Owen picked up his second booking of the evening. The Silkmen were then able to see the rest of the game out fairly easily, and were rewarded with the three points for their endeavours.