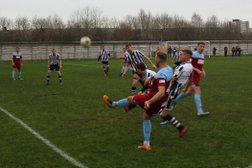 Despite taking an early lead, Flint fell to a their first defeat in eight games, as Colwyn Bay struck back with two second half goals

Both sides had early chances. With just two minutes on the clock, Flint put together a good attacking move, which resulted in Callum Bratley slipping in Nathan Brown, whose shot struck the angle of crossbar and post. The Bay responded with an effort of their own, as Mitchell Bryant hit a goalward effort that John Danby collected comfortably.
Good work by Nathan Brown then saw him win a corner, as he pressured a defender. And from that, Flint opened the scoring on 4 minutes. Brown swung the ball over, Richie Foulkes got a glancing header that sent the ball onto the far post, and Bratley was on hand to fire into the roof of the net from close range.
On the quarter hour mark, Andy Brown laid the ball off into the path of Alec Titchiner, whose 20 yard effort was just wide of the target.
The Seagulls carved out the next good chance, as Sion Edwards delivered a dangerous cross from the left, which was met by Joe Chaplin , but John Davies was well positioned on the line to clear the header. The visitors were awarded a penalty after 37 minutes, when Tom Kemp blocked Chaplin's run just inside the box. This was at a time when the Flint defence were temporarily in disarray, as Tony Davies had just received treatment after colliding with Bay goalkeeper Andy Coughlin, and was still waiting to be allowed to rejoin the action from the sidelines. Colwyn Bay skipper Tom McCready took responsibility for the spot kick, but saw his effort brilliantly saved by Danby in the Flint goal.
However, Flint were unable to take advantage of this let off, as they allowed the Bay to roll them over in the second period. They got back on terms on 52 minutes. Initially, Danby had once again pulled off another good save from Bryant, but Julian Williams followed up well and drove the loose ball into the corner of the net.
Flint tried to reassert their authority, and following some sustained pressure they forced several half chances, the best of which fell to Nathan Brown in a crowded box, but his on target effort was well blocked. Titchiner also had an effort from just outside the box on 65 minutes, but it cleared the bar.
The Seagulls were looking more and more dangerous in their attacking play, and struck again on 69 minutes. A free kick was played into the box from the right, around 35 yards out, and the ball was only half cleared, and was then met by William Bell who lashed it into the back of the net at the first time of asking. From that point on, Flint, uncharacteristically for them this season, lost all shape, and if anyone was going to score again, it looked more likely to be the visitors. Indeed, Bryant could, and probably should , have made it three on 79 minutes, as he was gifted an opportunity when the ball spun perfectly into his path from the head of a Flint defender, but with the goal seemingly at his mercy, he blazed over.
As the game counted down into added on time, Flint belatedly piled on the pressure, and Bay defender Darren Thornton saw red after picking up a second yellow in the space of a couple of minutes. But the hosts were unable to salvage a point as the visitor's defence held firm, denying them any clear opportunities.