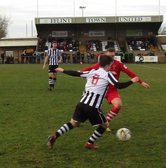 The hosts rarely had to click into top gear, as the visitors, despite displaying plenty of endeavour, lacked that clinical element in their play to seriously threaten, perhaps their lack of game time in the preceding weeks being a factor.
Brandon Burrows started for Flint, after missing the last couple of games, and he brought a dynamism to the midfield that had been missing, whilst Dom McHugh put in a display full of energy, as he raided down the left flank, and linked well with the midfield.
Early pressure by the Silkmen paid off in the ninth minute, as from a corner, John Davies was fouled as he battled for the ball, and a penalty was awarded to the home side. Mark Cadwallader took on the mantle of penanly taker, and he succeeded in slotting the ball past Joe Makaruk in the Buckley goal.
Just before the half hour mark, Callum Bratley burst through on goal, and placed his shot past Makaruk, but the woodwork denied the Flint striker, as it struck the post and then rolled along the line, before a defender, under pressure from Nathan Brown, hacked it clear. Flint continued to press, and Burrows was unfortunate on 32 minutes, when his swerving 25 yard effort almost found the back of the net, but for a stretching save from Makaruk, who managed to turn it around the post.
The second goal which Flint had been threatening, arrived on 38 minutes. Richie Foulkes received the ball from a throw in, and then charged towards the Buckley goal through the centre. On the edge of the box, he exchanged passes with Nathan Brown, and then ran on to calmly apply the finishing touch from about 10 yards as he slotted past Makaruk.
The game was over as a contest two in minutes into the second half when Flint made it 3-0. A good move down the right, eventually resulted in the ball being pinged into Burrows, who was centrally positioned just outside the box. He then deftly stroked it forward for Cadwallader to run onto. However, the Flint forward was second favourite, as a Buckley defender looked certain to intercept the ball. However, he missed his kick at the vital time, and Cadwallader's anticipation was rewarded as he ran onto the loose ball and swept it home from 8 yards.
The rest of the game was a bit of an anti climax, as Buckley huffed and puffed but lacked that bit of inventiveness to pierce the Flint rearguard, with John Davies and Tom Kemp not giving any ground in the centre of defence. Even a triple substitution on the hour mark by visiting manager Dan Moore yielded little reward.
Tom Hartley surged down the left to good effect on 83 minutes and crossed into the path of Bratley. He skirted around a defender, then produced a fierce strike that Makaruk did well to claw out at full stretch.
Buckley's fans had to wait until 2 minutes before the end to see their side have their first effort on target, when full back Dylan Roberts tried his luck from fully 30 yards, but Flint keeper John Danby was alert and managed to hold onto the powerful strike to protect his clean sheet.
The Silkmen had the final say when Dom McHugh rose to meet the ball, but his header could only find the arms of Makaruk who got down low to produce the save.