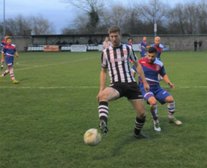 Flint overcame both the challenge posed by Bangor City and the elements to record a win, courtesy of Dom McHugh's first half goal

In a game marred by the strong wind, Flint mastered the conditions to earn the win over their opponents, whose line up resembled more of an Italian league side than one from the Cymru North.
Flint had the wind at their backs in the first half, and sought to make the best of it, especially through the long throws of new signing Jordan Barrow, who was making his debut for the Silkmen. It was from just a throw that they claimed the opening, and what turned out to be the only goal, of the game. Barrow hurled the ball into the box from the left, and as it bounced around in the 6 yard box, Dom McHugh struck out a leg and prodded it across the line, to score in the 16th minute.
The ball was in the Bangor net again in the 24th minute, but on this occasion, the linesman's flag denied the home side, as it was ruled out for offside.
As the half progressed, the game became a feisty and niggly affair, with some of the play acting from the opposition infuriating the home supporters and coaching staff. Fortunately, the referee was generally unmoved and kept his demeanour, as all around him were in danger of losing their heads.
At half time, Flint's lead looked extremely slender, especially given the fact that Bangor would enjoy the benefit of the wind in the second half, and the recent drop off in form the Silkmen have experienced in the second half of games over recent weeks. But to their credit, the home side dug in, stuck to their task, and even fashioned the best chances, as Bangor were generally limited to long range shooting outside of the box. The centre half pairing of John and Tony Davies were resolute, and relishing the challenge, ably supported by the full backs Tom Kemp and McHugh. And the midfield put in a great shift, with Barrow, Alex Titchiner, Brandon Burrows and skipper Richie Foulkes all making important tackles and back tracking to shield the defence when necessary.
Just before the hour mark, Flint broke to good effect, as Callum Bratley galloped down the left. His cross cum shot, struck the angle of post and bar, as Bangor keeper Gabriele Brino was beaten. The ball rebounded into open play and was picked up by Burrows, who with Brino still readjusting his position, lobbed it goalwards, out of reach of the keeper. Fortunately for the Citizens, Luca Suber was covering, and headed clear off the goaline,
This was certainly not a game for the purists, but Flint displayed the necessary grit and determination to emerge with a well deserved 3 points.