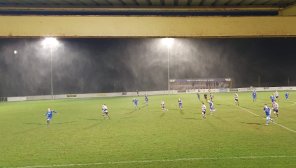 Flint turn in a 5 star second half display

Following a largely forgettable first half, Flint turned on the style in the second period and fired in five goals to secure a comfortable win.

Mark Cadwallader led the way for the Silkmen, notching a hat-trick with Nathan Brown and Alex Titchiner also on target.
The game started with a gusty wind blowing across the pitch, and both sides resorted to the long ball as they sought to master the conditions. However, neither defence was unduly troubled, and the first half an hour of the game was largely a non-event, notable only for an ankle injury suffered by Flint's Dom McHugh which saw him replaced by Andy Brown.
Flint sprung into life on 34 minutes, when Callum Bratley seized on a loose ball in the box and hit a shot that looked to be on its way in, until it stuck a Llangefni defender. Flint appeals for handball were waved away, as Nathan Brown latched on to the rebound and brought a good save from Steve Sinclair in the 'Gefni goal. Brown went close a minute later, when he screwed a shot just wide of the target.
Then, with a few minutes to go before the interval, Mark Cadwallader spurned a golden opportunity, as Brown picked him out unmarked in the centre, and from 6 yards out he put his header wide with the goal at his mercy. But he was to make amends for that miss in spectacular fashion in the second half.
Brown was once again instrumental, as Flint opened the scoring on 54 minutes, delivering a devilish inswinging corner, that had Sinclair in all sorts of trouble. Cadwallader was on hand, to deliver a glancing touch that directed the ball into the net.
Following a foul on Cadwallader on 65 minutes, Brown sized up the opportunity from a free kick 22 yards out. and curled the ball straight into the top of the net from 22 yards out, to make it 2-0.
Flint were now well into their stride, and relishing the conditions, as rain was now added into the mix, and was lashing down in the windswept stadium.
Cadwallader added his second on 68 minutes, as he side footed home when Bratley squared the ball across to him, before completing his hat-trick on 75 minutes, heading home from another Nathan Brown corner. The corner had been forced when Jacques Welsh had burst through on goal, but was denied by Sinclair, who pushed the ball out of play as he pulled off the save.
Finally, Alex Titchiner supplied a smart finish to wrap up the scoring in the 80th minute, when that man Brown again, found him with a delightful through ball, that capped off a stand out performance by the youngster.
Next Saturday we are home to Llandudno, and as it's our first home match since the sad passing of Kevin Loftus we are making the game a special tribute match in his honour. We hope as many of Lofty's friends and acquaintances as possible will come down and enjoy the game, and wear replica shirts of their favourite teams to unite as one big footballing family for this special occasion.