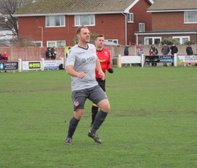 A game played in a ferocious wind, with chances at a premium went the way of the home side thanks to a second half Danny Davies strike

Prestatyn started with the wind at their backs, and pinned Flint in their own half for long periods. A failure to clear their lines properly almost proved costly for the Silkmen on 13 minutes, when an attempted clearance struck another defender, and the ball ricocheted into the path of Davies, but his drive was well saved by John Danby.
After that scare, the Flint rearguard coped with the conditions extremely well, and the home side were unable to create any further worthwhile chances. Instead, it was the visitors who looked the more dangerous, as they were playing the more constructive football. Just after the half hour mark, a back pass from a Prestatyn defender got stuck in a muddy patch just outside the 18 yard box. Nathan Brown reacted quickly, and seized on the loose ball, running direct onto goal. But Prestatyn keeper Jon Rushton proved a formidable barrier, and denied the Flint forward as he spread himself well. Then, a few minutes later, a well delivered free kick was powerfully met by Foulkes, who headed home beyond Rushton, but the celebrations were quickly cut short thanks to a raised flag, signalling offside.
Having finished the half the stronger, and now with the wind at their backs, Flint were expected to push on in the second period, but unfortunately this didn't prove to be the case, and instead Prestatyn wrested back the initiative. Rather than pushing up onto the Seasiders' defence, Flint allowed them far too much space to play out from the back, and time and time again, they were allowed to use the short ball technique on goal kicks, and not put under sufficient pressure.
The only goal of the game arrived on the hour, shortly after Flint had survived a goalmouth scramble. This time there was no respite, as hesitancy in the Silkmen defence proved costly, and a ball found Davies on the right, who rifled it back across the goal and into the roof of the net.
Thereafter, Prestatyn sought to slow the game down at every opportunity, and succeeded in frustrating Flint, who knew they now faced an uphill battle, as even a point was of little use to them.
As the clock ticked down, Mark Cadwallader and Nathan Brown both tried to to get on the end of a defence splitting ball on 83 minutes. It looked as though Cadwallader just reached it first, and lifted it over the onrushing Rushton, but a covering defender got back in the nick of time to clear the ball from in front of the goal. From the resulting corner, Foulkes saw his header tipped onto the bar by Rushton, and with that, any faint hopes of salvaging something from the game were snuffed out, as Prestatyn, for the second time this season, hung on for an odd goal victory over the Silkmen.
So, will it be third time lucky for Flint, when the two sides lock horns once again next Friday in the quarter finals of the Welsh Cup ? Time will tell.
Line Ups :
Prestatyn Town - Jon Rushton, Dan Roberts, Zebb Edwards, Kai Edwards, Myles Hart, Alex Jones, Mike Parker (c), Ben Maher, Jack Kenny, Sam Duffy (Jack Higgins 69), Danny Davies. Unused Subs - Ryan Woods (GK), Ross Weaver, James Jones, Oliver Buckley
Flint Town United - John Danby, Tom Kemp, Jordan Barrow (Jacques Welsh 79), John Davies, Stuart Jones, Brandon Burrows, Callum Bratley, Richie Foulkes (c), Andy Brown (Alex Titchiner 61), Mark Cadwallader, Nathan Brown. Unused Subs - Aaron Jones (GK), Chris Li, Kyle Smyth
Share via
FacebookTwitter
https://www.pitchero.com/clubs
Recent news