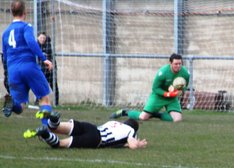 Flint come out on top in difficult conditions

In a game, that not for the first time this season, was marred by a strong wind, Flint managed to secure the win

Llanrhaeadr started the game with the blustery wind at their backs, and put the Flint defence under enormous pressure during the first period, but were unable to score a goal. Instead, it was the home side who opened the scoring, breaking to devastating effect on 37 minutes, with Mark Cadwallader once again getting on the scoresheet. That was one of the rare occasions that the Silkmen had sight of the visitors goal, as they had found themselves penned back in their own half for long periods, as the wind battered them.
On 10 minutes, an Iain Edmunds free kick for Llan from wide on the right was whipped in towards the Flint goal, and whistled just past the far post. Then, shortly after, Iwan Matthews struck another free kick just around the wall, which was heading into the goal before Aaron Jones sprung across to touch it around the post.
The visitors also forced a number of corners, which were delivered as inswingers under the Flint cross bar, that had the Silkmen defence on their toes as they sought to repel the danger. Jones and his defenders, particularly John Davies, did well to deal with the threat, to keep their goal intact.
Matthews had another chance on 26 minutes, but his 20 yard effort finished just wide of the target.
Following a rare foray into the opposition half, Flint were awarded a free kick on 30 minutes. Nathan Brown's excellent delivery found John Davies, who was running in on goal, but his header just cleared the bar.
Then, seven minutes later, following a good interception in defence from Davies which set things in motion, Flint sprung forward to open the scoring. Alex Titchiner picked the ball up in the midfield, and delivered an excellent through ball into the path of Mark Cadwallader, who was shoulder to shoulder with a Llanrhaeadr defender. Just as it looked as if Cadwallader was losing out in the foot race, the defender stumbled and allowed the Flint striker to break free and coolly slot the ball past the advancing Woods in the Llan goal to put his side 1-0 up.
In the second half, Flint were expected to extend their advantage, as they now had the wind at their backs, but they made hard work of things, and it was a much more even affair,
Dom McHugh hit a goalbound volley on 51 minutes, which would have surely found the target, had it not been for a well placed Joe Makinson, who got in a goal saving block for his side. A few minutes later, a long throw into the visitors box was horribly misjudged by Woods, and ran through to Cadwallader, who just couldn't apply the telling touch, allowing Woods to regather at the second attempt.
Having weathered that early second half storm, Llan became more ambitious, and posed more of a threat. On 58 minutes, Matthew Williams managed to get in behind the Flint backline and hit a shot that Jones got down well to save.
With 5 minutes remaining, Flint clinched the vital second ball, with all three substitutes playing a part. Jordan Barrow won the ball in midfield, and found Brandon Burrows, who slipped it sideways to Jacques Welsh who was in space, and he curled it into the net from 20 yards.
Llan managed to get themselves on the scoresheet in the last minute of normal time as Williams broke free once again, and this time made no mistake as he drilled a low shot into the net.
But Flint successfully saw out the remainder of the game to secure an ugly, but important win.