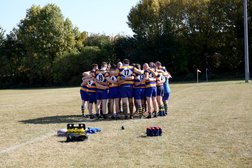 Mixed Season for the Ferrets but great improvements made

The Ferrets season started somewhat disjointedly with the first game of the season with a more makeshift team than usual seeing hooker Ed Harrison filling in at fly half and backrower Fred Crouch in the centres. While the first half began strongly with us taking the lead through a Jack Hawkes debut try, poor defence allowed Charlton Park to get back into the game with a quick tap try from Jacko resulting in the half time score of 24-12. From there, the second half took a downward turn with kick offs proving to be a struggle for the unfamiliar fly half ending in a victory for Charlton Park. Nevertheless, the team dusted themselves off for the visit of Shooters Hill the following week.

The game again started well with Luca scoring for Cray but then fitness again began to tail off ultimately ending in some defensive lapses and losing the game. Despite this, and with 2 weeks off to enjoy the World Cup, Footscray were fired up to play against familiar foes the Gravesend Moles.

Due to confusion on the kick off time, the Ferrets found themselves at Gravesend 2 hours prior to the start time which allowed the 14 men time to organise themselves for the challenge ahead with Pat Duff moving into prop from his more familiar second row position. What followed was a fairly quiet first half with the Moles getting the only try when their feed at the scrum on the 5m was turned over by Cray only for the ball to come out of the Cray scrum with Gravesend the first to react. In the second half, Cray found their stride with Darren McEwan and Fred Crouch making hard yards through the Gravesend defensive line. Cray got back into the game with Harry Butler scoring from a loose pass from Gravesend with Fred adding a second shortly after with a powerful run from a penalty close to the line. Gravesend then made the man advantage count hitting back with 3 tries to make the game 28-14 going into the closing moments of the game. As Cray enjoyed sustained pressure in the opposing 22, a clearance kick was blocked with Harry Butler adding his second of the game unfortunately getting himself knocked out in the process. While there was (thankfully) no lasting damage, this injury brought Cray down a further player now playing with 13. Despite this, Cray continued on the offensive with Chris Birch using his pace down the wing to get the try that brought the Ferrets within 2. Joe Puddifoot stepped up to tie the game and slotted the kick with barely a minute left to play. Cray then defended hard for the last 10 minutes with Ash Perry in particular putting in some impressive hits with Cray securing the draw with Dave Evans kicking the ball into touch. Cray toasted this hard-fought draw with a trip to the Mole Hole to enjoy a few hard earned beers with their opponents.

After a few weeks with no league games due to opponent availability, Cray then played away at Bromley which saw a particularly strong performance from the men in blue and gold with good offloading in the centres and well executed play throughout deliver a 52-12 victory. The only mark on an otherwise good day was the first yellow card in the young career of Harry Watkins for a high tackle. Despite this, Harry again performed well in this game as he had throughout the season tackling well and securing possession at rucks.

The following week the Ferrets came down with a bump with a 52-12 defeat to Brockleains in a scrappy game played in tough conditions with injuries playing their part for the Ferrets resulting in gaps in the defence. Connor Sheils at scrum half playing well with lots of pressure on him throughout the game. Despite the defeat, this game fell on the day of the Christmas Jumper party with all of the club coming together to enjoy a few drinks and reminisce on the last year which had seen great strides made by the 2nd team over the last 12 months.

The first game of 2020 saw Footscray face off against Gravesend played at Brockleians due to a waterlogged pitch at Cray. The 80 minutes played were not as eventful as seen at Gravesend earlier on in the season, and with a full 15 available on this occasion, the team worked phases together well together throughout the first half with the game finely poised at half time. However, a high penalty count and injuries throughout the second half, saw Cray lose grip on the game resulting in a 21-10 defeat.

Despite this setback, Cray went to Met Police the following week with the aim of getting back to winning ways despite the injuries the team were carrying. Things started well with Matterton scoring under the posts after a good run through the Met Police defence from a good Cray line out. Following this, Met Police stepped up a gear to go onto score 47 unanswered points against a Cray side suffering with injuries throughout the game and not converting chances despite good effort throughout the game.

After a week off, Cray were feeling refreshed going into tough weather conditions at home vs Dartfordians Sinners featuring some new faces with Craymen recruiting hard to ensure we had sufficient numbers. What followed was a hard fought game in wet and windy conditions with Cray running the ball and offloading well finishing with a 15-7 victory.

With the remainder of the season cancelled, this was the last time Cray would run out for the 19/20 season. Overall, was a mixed bag for Cray with some good performances but injuries and fitness ultimately resulted in a tail off towards the end of the season. Looking forward to bigger and better things 20/21 season building on the good platform built over the past couple of seasons.