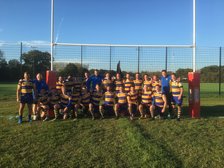 The 2019/20 season started for Footscray at home, in the sunshine as hosts to Sittingbourne. With a season opening party planned, the club looked at its best, and all hoped that the pre-season effort under new Coach Rogers would have the team sparkle just as much after some good pre-season performances against tough opposition.

Sittingbourne arrived at Cray in the back of a winning pre-season and a top 4 finish in Kent 2 last season, and the game started with some close competition. Footscray secured good setpiece ball, and was dominant in the scrum, repeatedly turning over ball or putting the Sittingbourne attack on the back foot. The Sittingbourne lineout was well drilled, with lots of movement and good ball retention. Both sides ran close phases before attempting to go wide, and there was evidence of early season rustiness on both sides - timing and hands letting both sides down on occasion. Footscray did a good job of controlling play, bosses by Gower at 10, executing open play moves tight and wide, and engineered a number of line breaks - Gerrard repeatedly hitting lines that put him beyond the defence. Sittingbourne probed and found a solid defence, and despite some dangerous running from their 10 and back 3, they were shut down or lost out to their own inaccuracy. The first half saw the scoreboard stay close - 14-7 at half time through an open play score that Derby scores after a Luke offload, and a Gower score following a dominant scrum 5 out. The Sittingbourne came from a chip and chase out wide, a clever kick through from isolated players out wide and finished well.

The half time break gave Footscray the opportunity to refocus on the game plan, and it paid dividends in the last third of the game - great execution in all aspects, and a good tempo maintained led to the addition of another 31 points with no further Sittingbourne score - 45-7. Additional scores came from a penalty try from a scrum, debutant Max, Jamie, Gower and Smithy.

The game summarised how well the team can play when we execute a plan - dominant setpiece, control in centre field, engineering gaps with some cutting lines from the backs. As ever there’s work to do - recognising the threat out wide, decision making and executing the line breaks - but there’s a solid platform for the season in place, and they’ll be tackled at the great training sessions we’ve been having.

Post game the beer, bbq and music flowed, and the kids wouldn’t let the big kids near the bouncy castle. A great season launch. Next up for the 1s are Weavering - a club we’ve never faced, who were competitive with Lordswood this week. Hopefully we’ll travel to Maidstone well prepared.