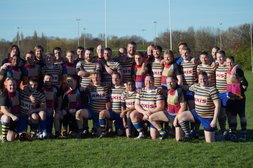 Tough opener for the Ferrets with a lot to look forward to for the rest of the year.

On a hot, sunny, day at Charlton Park’s home ground the Ferrets arrived keen and early for their first league game of the season. A 1 and a half hour warm up was maybe excessive... but gave the Ferrets time to settle Into their new line out options and play maker Ed Harrison stepping up from hooker to 10 for the day.

From kick off the Ferrets dominated possession for the first ten mins. Some excellent interplay between the big forwards getting the Ferrets camped in the opposition 22 for a long period. Play broke wide and with league debutant Jack “the Hawk” “Hawkes (no relation to Chesney) putting on the wheels to take cray over in the corner and put the Ferrets 5-0 up.

The Ferrets didn’t see the ball for a further 20 mins and Charlton took advantage with possession running in a couple of well worked tries and a soft one from some poor defence from the ferrets. Cray were given a reprieve however when the Charlton park winger tried to ground the ball for a try on the 5m line which was gladly swept up by George Hales.

After the first drinks break, cray were finally able to get some claws on the ball and once again assert our superior forward interplay with some excellent reds around the fringes from big runners Hayes, Jacko, Dunc and Kiddle. Harry Watkins clearing rucks for fun. Another 10 mins of pressure resulted in a penalty 10m out and with jacko spotting a winger and a rather flimsy centre in front of him he tapped and steam rolled the poor young lad in front of him for Crays second try. Ed converting the kick with a finely stroked toe poke. The game settled at 24-12.
After half time Charlton park brought on a 6ft3 17 stone mutant at 12 and despite long periods in the park 22 cray leaked tries up the middle and wide.

Nothing too exciting to report in the second half but a final score of 80-12 did not do the Ferrets justice. Some questionable forward pass decisions and wonky line out throws could have seen the game back at 60-12 but a comprehensive schooling for the defensive line. Lots of positives to work on in training, protecting the inside 10 channel and getting forwards out in the line will be the focus. Lineout went reasonably well and scrum although never went backwards needs some tweaking on our own strike.