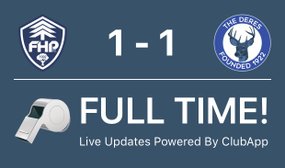 FHP tweaked their formation somewhat, that obviously worked wonders to deny the visitors any real chances to score.

Within the first half both sides had good possession and created a number of goal scoring opportunities, but was either well defended or wasteful finishing.

FHP edged the first period in terms of controlled possession but couldn't make it count in terms of putting the ball into the oppositions goal.

The second half started well for E&B, as they made a conscious effort to take the game to the hosts. Within a fifteen minute period the visitors looked as though their efforts paid off, but again were denied by the FHP rear guard & goalkeeper.

On 73 minute Adam Toubal got in behind the EB defence, with a lot still to do, he unleashed a great strike into the roof of the net, as the goalkeeper was left rooted.

EB were stunned from going behind, but were even more determined to get back into the game especially when the tricky & pacy wide players were in possession of the ball.

FHP had two glearing chances to double their league, if taken, that would probably have put the game beyond the visitors, but the final execution terribly failed the home side.

Forest Hill defended well to stifle E&Bs attempts for the equaliser, until one minute into injury time when they capitalised from a rear defensive error, as the forward was able to head into the net from finely delivered cross.