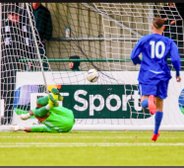 Last week FHP were seconds away from a win against Erith & Belvedere, who snatched a last gasp equaliser l, ending the match 1-1.

This week was an away visit to The St Paul's ground to fellow south Londoners Fisher.

Early in the game, on their 3G pitch, the hosts pressure created a hatful of goal scoring chances, but they failed to score, due to a combination of the effective FHP defensive play & woeful finishing from Fisher.

After riding the early storm, Forest Hill settled into the game, by doing so controlled possession of the ball. Within that period FHP gained a corner kick. A penalty was awarded to the visitors resulting from a foul in the box, that Ashley Robinson duely scored from.

Fisher responded well within 10 minutes and deserved their equaliser after capitalising from an FHP defensive error from a good strike in the box.

The match became open & balanced and still end to end, with both sides imposing their authority especially in possession of the ball.

FHP displayed some good link up play near the Fisher box, for Ashley Robinson to competently finish off the move with a great strike into the bottom corner of the goal, leaving the keeper no chance.

Not long into the second period FHP increased their lead further, from a fantastic well worked corner. A diving header from Jay Burke proved to be the goal the secured the all important win and ultimately the three points.

Fisher - to their credit - worked extremely hard & showed a desire to get back into the game, but that was matched by an equally organised defensive FHP side, that occasionally rode their luck a little, but held on to the win in front of a raucous vibrant crowd on Salter Road.