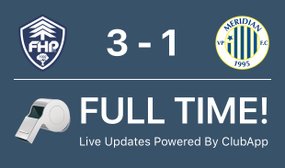 Forest Hill can take comfort from their solid performance in beating a strong Meridian 3-1 at Ladywell Arena.

The visitors fielded many ex Forest Hill players and ex manager too, but the game was played with a great spirit and good football irrespective of the extremely wet & testing playing surface.

Early in the game The hosts dominated possession but were under pressure from two MVP goal scoring opportunities but the FHP keeper saved well to keep the score line at 0-0.

FHP had a depleted squad for this encounter but led when Kehinde Aliu capitalised from an early corner to fire home from 8 yards.

MVP we’re still a threat with their attacking players & showed what they were capable of on many occasions, but FHP dealt with quite comfortably.

After a quiet start to the second period, Andrade Caetano produced a moment of quality, after being played through slammed a third from 20 yards.

Overall the game was quite comfortable for FHP, but a lapse moment meant the visitors capitalised, with a consolation goal as ex Forest Hill forward, Jay Garrick took his chance well, as he struck a well hit shot into the corner of the goal.

With 15 minutes remainingFHP were able to see the game out but still could have extended their lead from a few more created chances.

A disciplined performance from FHP as they were more vibrant throughout and rarely came under threat in the second period as they sealed a league win against a spirited MVP.