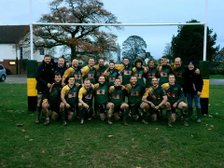 Frampton welcomed runaway league leaders Chosen Hill on Saturday afternoon for what would be their third encounter of the current season. Frampton had lost heavily at Chosen Hill back in November, but had run them close in the Gloucestershire RFU Senior Vase cup final in January. Conditions were overcast but dry, although the pitch was very heavy and there was a very strong wind blowing down the pitch towards the changing rooms.

Thanks to Ciara, Dennis and Jorge, Frampton’s last match was six weeks ago on 25th January. Unfortunately, this showed through on many occasions. Frampton were also hampered by injury and by unavailability, but in fairness, Chosen Hill’s team was different to that which played in the cup final.

Playing with the wind, Chosen Hill took the lead early on with a simple straightforward penalty goal. Frampton resisted well, but the visitors extended their lead after fifteen minutes with a well taken try in the corner which was excellently converted from the touchline. Frampton had their moments, but were not able to make any real impact. Chosen Hill had the try scoring bonus point sewn up by half time and lead comfortably by 25 points to nil.

Now playing with the wind at their backs, Frampton were hopeful that they would be able to exert some sustained pressure on the Chosen Hill defence. Frampton did have a much bigger share of the play than they did in the first half, but the Chosen Hill defence held firm. The visitors added three further tries in the second half, and built a comfortable lead of 42 points to nil. Frampton did manage to put together one last play and scored a good try in the left hand corner by Morgan Lewis which was well converted by Lewis Oakley.

There’s no doubt that a six week layoff didn’t help matters, but overall this was a disappointing performance and result for Frampton. Chosen Hill are undoubtedly a very good side who will do well a league higher next season. However, despite this, there were a couple of bright spots for Frampton. Thomas “Track Suit” Warren played what was probably his best game for the First team and was rightfully awarded Frampton’s man of the match award for an industrious and busy afternoon’s work. The other was debutant Will Cooke, who joined the fray as a replacement after fifteen minutes. Still a Colt, Will performed strongly at prop forward and didn’t look out of place playing senior rugby. A bright future beckons.

Next weekend Frampton have a rearranged home fixture against Cheltenham North and their imports. This will be another tricky fixture with Frampton having lost heavily in the away fixture before Christmas. Before this, Frampton also have an away fixture on Wednesday evening against Imperial in the Bristol Combination Vase. Conditions permitting, this match is scheduled to be played under floodlights at Bristol Harlequins. Your support would be appreciated.