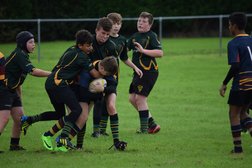 Tough day for Fram against strong Broad Plain side

It was a tough day at the office today against a strong Broad Plain team as the visitors ran in nine tries against a weakened Frampton side.

The home team started well with some good possession inside the visitors half, however when the ball fell loose the visitors picked up to run the length of the field and cross the line however before the player could put the ball down Mike came flying in with the tackle and the ball was fumbled and cleared. It was short lived though as when the ball was picked up 20 meters out from the Frampton line some neat passing by Broad Plain created an overlap for the opening score. Some strong runs and quick passing by the visitors along with some missed tackles by the home side enabled Broad Plain to open up a commanding lead.

The second period looked as though it was going to be the same story when Broad Plain scored early on however following a scrum won by Fram, Finn at scrum half found Matt and his quick pass set Nik free to sprint clear and score in the corner. A quick try from the kick off by Broad Plain increased their lead but some better tackling by Fram, especially from Olley, Roy and Gabe were holding the visitors at bay.

Fram again showed better defence in the third period with the ever busy Marcus and Jack blocking any attacks. A busy morning for Rohan at full back but the boys never gave up and can take great pride for the hard work and effort shown. Many thanks for Barry for refereeing today.