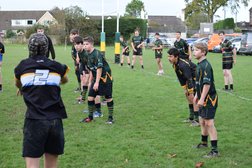 Honours even at Crossbow

With a number of players making their debuts for the Green Army this morning, Frampton welcomed Nailsea and Backwell to the main pitch at Crossbow.

The game started well with both teams finding their feet in windy conditions. Frampton were being pushed back by a strong N&B pack but were defending well and a crunching tackle by Corey in the opening minutes set the tone for the game. The visitors were close to tacking the lead when a good passing move ended in a forward pass and play was brought back. Shortly after some great defending from Luke and Jamie held the visitors at bay inches from the Frampton try line. The deadlock was broken however midway through the first half when the visitors found a gap and rushed through for the opening try. Ed was being kept busy at full back but was covering well and had several good run backs before hitting traffic and with the likes of Gabe, Matt and Harry in support it was all to play for. N&B extended their lead though as the half drew to a close when a burst of speed on the wing found space and it was 0-10 at the half.

The second half started with Frampton in buoyant mood. Defensively the home side looked strong with Sam, Alfie and Kane all putting in a good shift. There was nothing between the two sides yet the visitors had a two try advantage. The balance shifted though when following a scrum to Fram, Rohan at scrum half found Jack in support and his short run and pass found Corey whose burst of speed gave him the edge to dive over for a debut score, Fram were back in it 5-10. With their tales up it was end to end stuff and another great passing move shortly after was finished off by Nik on the wing for the equalising try in the corner, the scores were level. Both Mike and Finn had good runs as Frampton pushed on for the win, but an organised N&B side kept the home side out.

A great game and an appropriate score for two teams who gave their all in this very entertaining game played in great spirit. Thanks go to Adam for refereeing and for the support of both sets of parents on the side lines.