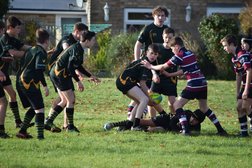 Great away day for the U14s

It was an early start this morning, up the M5 to face Cheltenham side, Old Patesians and with a squad of 17 Fram were in buoyant mood.

Normally slow starters, Fram had good possession from the off and when they won a scrum, Lewis’s pass found Jack who ran forward and drew the defender before off-loading to the on-rushing Corey who broke the tackle to score through the middle and with Jack converting the visitors had an early lead. This was doubled shortly after when an identical move ended in the same result and Fram were ahead 0-14. Sam’s powerful run nearly added to the score line and with Marcus at hooker Fram were winning all the scrums. Following a put in by Old Pats, Marcus flicked the ball back, Lewis ran blind side and his short pass found Jack who increased the lead. Fram were held on the line with their next attack which was well supported by Kane, Alex and Mark but when the ball was kicked out by Old Pats, Ed at full back picked up and returned the ball before Jamie gathered the loose ball to cross over. From the restart Ed again caught well and his good run resulted in a pass to Corey who rang cross field to out fox the Old Pats backfield and score under the posts and with Jack converting, Fram were leading at half time 0-31.

There was no let up in the second half when another won scrum resulted in Matt picking up the loose ball but with the line markings unclear he accidently ran the ball out of touch and the try was disallowed. The resulting penalty was kicked by Old Pats and picked up by Ed who weaved in and out of the Old Pats defence and dodged several tackles to score under the posts. Fram were on the attack again and when Corey’s kick was sliced he was quickest to react and kicked forward and as the ball crossed the try line dived over for the score. Mike was unlucky not to score with several determined runs but Fram were on the score sheet again when following a great passing move along the line Jamie showed his strength for the try, Jack converting. A quickly taken penalty by Rohan left Old Pas napping for Corey to score and as the game came to a close a break in midfield by Nik enabled him to run clear and score under the posts. Some great defence by Luke and Olley meant a clean sheet for the visitors in this resounding win.

A convincing win for Fram today and well deserved for all the hard work that the players and coaches have put in over the past weeks. Great support from the side lines as always, well done team.