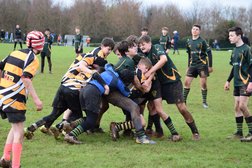 It was all action as Hoopers as a U14s welcomed Yatton for this mornings action.

Fram started well and from the kick off were on the attack. Following a good passing move the ball found its was to Nik who crossed over in the corner to give the U14s an early 5-0 lead. As Yatton kicked off the ball was caught by Ed at full back and he weaved in and out of the opposition defence, finding Sam who in turn found Jamie and his strength saw him score. Yatton then applied some pressure and some great tackling by Alfie, Marcus and Kane kept the visitors at bay. However when a Frampton scum was awarded deep inside their own half the ball was played back to Jack whose deep kick out foxed the opposition and when Mike stole the ball he passed to Jamie to break several tackles to score his second try of the day. Another try came shortly after when from a scrum Lewis found Jack who sprinted clear to score under the posts. With Yatton on the back foot their kick out found Ed again who ran down the line only to be tackled 5 metres out but his quick thinking found the supporting Lewis to score. Olley then scored a push over try and before the half came to an end another kick out by Fram was picked up by Rohan for a try.

There was no let up in the second half and a great run by Matt opened up Yatton again and the pass down the line found Corey who crossed over to score. A good run by Kane found Olley who in turn burst forward only to be tackled a metre out but when the ball fell loose it was Rohan again who was on hand to end the scoring for a rampant Frampton performance.

A dominant display from the U14s today and it was great to see their confidence rise as a result of recent games and some great training sessions.