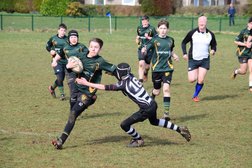 Fram edged out in thriller.

The Green Army crossed the bridge today for the return game again Chepstow. With no sign of the bad weather, which had seen several games cancelled of late, it was nice to see the sun and for the boys to get a run out.

An even start saw both teams sounding each other out but it was the home side who took the lead when following a scrum, Chepstow broke clear and some good passing down the line saw them break the Fram defence for the opening score.

Fram fought back immediately and were unlucky not to get back on level terms when a good passing move of their own saw Mike pushed out a metre from the line. More pressure saw Fram threaten and after a scrum won by Matt, playing a hooker today, the ball fell to Jamie and his great jinking run put him deep inside the Chepstow half before finding Lewis who was held up just short of the line. The visitors were soon on level terms though as the pressure told, another won scrum found Corey whose pass back inside found Lewis who in turn passed to Jamie to dive over, it was 5-5. It was end to end stuff and as the half came to a close Chepstow were awarded a scrum five metres out, the ball was shipped to the blind side and with only the one man to beat the winger crossed the line for the try. With the conversion scored it was 12-5 to Chepstow.

The second half started and from the kick off a scrum to Chepstow was again worked wide and a neat side step by the attacking player saw him cut inside to increase the lead, with the conversion successful, 19-5. Fram were defending well and some great work by Sam, Luke, Marcus, Alfie and Ollie kept the home side at bay. Fram were being kept busy and the kick outs from Chepstow were being picked up well by Ed. A great move by Fram mid-way through the half saw Jack run through and ship the ball down the line, it seemed a certain try but at the last moment the ball was passed behind Nik and despite his best efforts could not collect. The game came to a close with no additional score to give the home side the win.

Unfortunate for Fram today between two very even sides with the winning margin not reflecting the effort the boys in Green had put in, it could have gone either way. A big thanks go to all who attended today and to the coaching team for getting the players motivated.