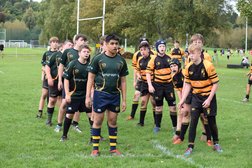 A tales of two halves !

How great was it to get back on the rugby pitch or at least the sidelines for us parents on this gloriously sunny morning. And there was more good news for The Green Army as they welcomed four new additions to the squad as they took the field with a full 15 players.

Keynsham started well and pressurised the visitors from the off. The Fram defence was holding strong though and there were several strong tackles from one of the new boys Brandon as well as Gabe and Rohan. The home side finally broke the deadlock when some quick passing enabled them to cut the Frampton line to score under the posts. Fram immediately fought back though and following some good possession of their own their strength and determination told when they scored a great push over try and it appeared to be Jamie that emerged from the pile of bodies with the ball. It was end to end stuff as Keynsham pushed on and extended their lead as they were able to break through again. Buoyed on by the support from the crowd Fram advanced well into Keynsham’s half and when the ball was passed back into their own try line the ball was fumbled and Jack was quickest to respond and touch down however the score was not given as the player had knocked on in his own try area.

Fram were not disheartened though and following the scrum, with Roy at hooker and new boys Alfie and Imran in the pack the ball came out to Lewis and his pass found Jack whose burst of speed put him across the line for the try. As the half came to an end Fram who had passed the ball well, worked it wide again to Nik and he stretched his legs to break free along the line and with Jack converting it made the score 12-17 to the visitors at half time.

Unfortunately, the second half was not as competitive as the first and Keynsham’s superior fitness showed and despite some great defending by the likes of Finn at full back, Olly, Matt and Mike the home side capitalised on several errors to complete the win. There were some encouraging powerful runs by Luke and he was unlucky not to get on the scoresheet towards the end of the game.
Certainly some very positive signs from Frampton and it was clear that the new training regime was working well. Some great passing and tackling, a real team performance and plenty to build on for the coming matches. Thanks to Adam for taking on the coaching reigns and Darren for organising the boys and providing the training.