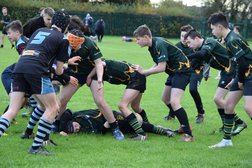 Great entertainment this morning as Frampton welcomed Caldicot to Hoopers. After an excellently observed minutes silence the boys took to the field with what was to prove to be one of the best games we have seen so far this season.

Fram got off to a slow start and when Caldicot won a scrum, half way in Frams half their No 8 picked up and ran to the blind side. With the overlap his short pass to the wing found his team mate sprint clear and despite Matt’s strong tackle as he approached the line, his momentum carried him over for the try. This prompted Fram to wake up and they came fighting back with a scrum of their own 5 meters from the visitors try line. Lewis at scrum half picked up and found the on running Jack whose strength saw him cross over to level the scores. It was end to end action and some great ball work by Caldicot saw them work it wide and after several missed tackles the visitors crossed the line for a try in the corner. Again, Frampton fought back and another scrum ten metres out was passed along the line and this time it was Corey whose burst of speed saw him break the line for a try under the posts and at half time there was only two points in it 10-12. Credit to Mark, Kane and Alfie for their committed tackling and for Roy, Marcus and Olley for their work in the scrum.

Fram started the second half in good spirits and when the ball was fumbled following a Frampton scrum, the ever busy Ed playing at full back picked up and his quick thinking saw him run clear for a great score, Fram had the lead ! With their tails up Frampton attacked again but when a kick forward was picked up by Caldicot their full back weaved in and out of the Frampton defence for a great run and score, it was now 15-19. As you would expect the home side bounced back and when they were awarded a penalty Jack tapped and pass found Corey who rang wide for his second try of the day, Fram were ahead again 22-19. With the threat of Jamie and Nik going forward and strong defence at the back from Luke and Sam it was all to play for. The visitors burst forward and nearly went in front but for some great tackles by Mike and then Matt just short of the line. As the game came to a close, just when you thought Fram would hold on for a famous win Caldicot found a gap to give Caldicot the lead and with a few minutes remaining Frampton were unable to strike back.

A thoroughly enjoyable game, played in the true spirit of the game and enjoyed by all. Although Fram fell just short there was some great performances and smiling faces from the boys and parents alike. Thank you for Adam for refereeing today and for both sets of parents for their support.