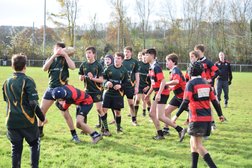 Frampton travelled to Bristol Manor Farm for a four way tournament against Gordano, Old Bristolians and Swindon Supermarine in what was a very enjoyable mornings rugby.

Fram started the day against Gordano and although they started slowly a great pick up and run by Matt brought the game to life, but he was tackled five metres from the opposition try line. The resulting scrum was won by Roy and with Rohan at scrum half, his short pass found Jack who in turn found birthday boy Nik who span smartly to avoid the tackle and run clear for the opening score. With time running out in the first half and a scrum to Gordano, the opposition moved the ball wide and the player cut inside to wrong foot the defence to level the scores.
The second half was frustrating for Fram as a series of bemusing penalties denied them field position and even more so when Luke dived over but play was inevitably called back, and the game petered out to a draw.

In buoyant mood Fram kicked off however the ball was picked up well by the opposing team, and when the player ran wide he found the overlap for an easy score under the posts. Fram were stunned but came fighting back and when Nik burst clear he was held up a couple of metres out but great support from Mike enabling Nik to find his man and Mike sprinted clear to level the scores. The following kick off by Old Bs fell short and when the ball bounced back Nik’s quick thinking and pick up found him in open ground to score. Fram attacked again and a strong run by Sam set up Rohan who in turn found Jack and he passed wide to Jamie to score under the posts, Fram were ahead 19-7 at the half.

Fram started the second half as they had ended the first on the attack and Old Bs were having to kick out to relieve the pressure. One such kick found Alex and his smart pick up and pass found Nik who showed his strength to score again. It was constant Frampton pressure with Kane having a great run and when the ball fell loose Sam picked up and his determination resulted in a try. Next a burst by Olley and with Matt in support his pass found Nik for his hat trick which finished the scoring.

With tired legs Fram took the field again for the final game of the day and with Swindon having won their previous two games it was always going to be tough for the boys. Swindon pushed forward and despite their probing Frams defence with the likes of Alfie, Mark and Marcus held firm. The breakthrough came shortly after though with a try in the corner. Ed was being kept busy at full back and his weaving runs were some rest bite for Fram but the huge effort that they had shown in the previous games began to tell and Swindon were able to find space for the win.

A really great team effort by the boys today in all three tough games and they got their just rewards with some great performances. Overall a positive day.