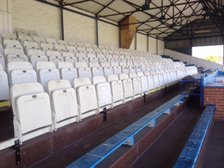 Frickley Athletic have begun the task of installing plastic tip-up seats into their main stand to replace the existing wooden bench seating.

The seats are part of the Legacy of the London 2012 Olympic and Paralympic Games, having been sourced from the Olympic Aquatics Centre at Queen Elizabeth Olympic Park through the London Legacy Development Corporation (LLDC).

Being responsible for the management and development of Queen Elizabeth Olympic Park the LLDC committed to securing sustainable future use for all the materials that came out of the park. Clubs, charities, schools and any other group that helped and enhanced the local community were offered the opportunity to claim materials from the Queen Elizabeth Olympic Park towards the end of last year and Frickley Athletic were successful in being granted 300 plastic seats from the Olympic Aquatics Centre.

Several rows of seats have now been installed into the stand with the rest to be installed over the close season.

The club would like to place on record its thanks to the LLDC for granting the club’s request for the seating as well as thanking Alphin Pans of Delph for making and donating the seat brackets, the Sheffield branch of Anixter for donating the fastenings and also to Jon Hood for his help with transporting the seats from London.

Additionally, work has been progressing on preparing the pitch for next season. The pitch has seen sand applied, been re-seeded and fertilised.

With numerous jobs to be undertaken during the summer there will be some working days in the coming weeks. Any help on these days will be greatly appreciated.