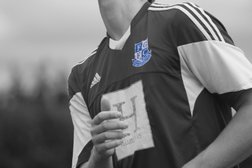 This was a top-of-the-table clash and, considering that and the two teams' identical recent form, I was expecting this to be a tight game and was expecting the two teams to cancel each other out. However, as I report below, this game completely defied everyone's expectations as Frimley Green overwhelmed Bedfont & Feltham in the second half to make a real statement in the promotion race:

The home side had two good chances in the opening ten minutes, the first of which saw a shot poked inches wide and the second of which saw a volley whistle past the post. Bedfont & Feltham then started to push up in response and forced some real defensive scrambles as they attempted to take the lead. In these early stages, both teams were placing immense pressure on the opposition defence, while at the same time leaving their own exposed to intense counter-attacks. One of these almost saw Dan Bone give Frimley the lead as he found himself through one-on-one with Bedfont keeper Devon Gordon, only for a good save to deny him. At the other end, Bedfont missed a golden chance three minutes later, a low cross played across the box before Ross Nunn and Farhad Mahboudi both scuffed their attempted tap-ins.

In the 24th minute, a push from Bedfont's Jamie Pearce saw Frimley earn a penalty, with Zac Horkan stepping up and calmly converting to break the deadlock. After this, the game became tense and scrappy as both teams searched for further openings in their attempts to change the game. A few chances came at both ends, but for much of the next fifteen minutes the two midfields dominated. It took until the 39th minute for another clear-cut chance to come: a long ball over the top eluded the Bedfont defence and forced Gordon to come out for it, with Sean Latimer chipping past him and towards goal, only for the ball to bounce wide. 1-0 at half-time.

After a less-than-stellar first half performance, Bedfont would have hoped to make a better start to the first half, but instead they crumbled in alarming fashion: Frimley kicked off the second half, instantly played a longball over the defence to set Latimer through to shoot and score off of the post. This can't have been much more than ten seconds into the half, so Bedfont were understandably shell-shocked. As such, it barely came as a surprise when Frimley made it 3-0 five minutes later: a corner was played into the box and an initial shot was blocked, but the Bedfont defence failed to clear and the ball eventually fell to Bone for a tap-in. Then, in the 57th minute, Latimer almost made it 4-0 with an attempted tap-in from a cross, but his effort went just the wrong side of the post.

Bedfont had their first real chance of the half just after the hour mark, Mahboudi receiving the ball from a corner and getting a shot away, only for his effort to be blocked and then cleared away after a bit of scramble. However, the game looked all but over in the 66th minute as Bone made it 4-0: the long ball over the top once again wasn't dealt with and Bone had plenty of time to receive the ball and calmly chip over Gordon. Despite this, though, Bedfont didn't give up on their attempts to attack and they brought on Jordan Sarfo in an attempt to at least get a consolation: this almost immediately paid off in the 69th minute, as a Sarfo cross reached the head of Mahboudi and was only kept out by an excellent save from Frimley keeper Chris Harris.

A few more Sarfo-led attacks followed - including one where he ran the length of the pitch before having his shot saved - before Bedfont deservedly scored their consolation: several shots were saved or blocked on the line before Elliott Hayden got a tap-in. This really seemed to revitalise Bedfont and they started to surge forward, forcing a few more goalmouth scrambles but somehow failing to score each time. However, that very faint hope of a Bedfont comeback was ruthlessly extinguished when Frimley scored their 5th in the 81st minute: Bedfont lost possession in their own half, allowing George Bowerman to finish with a powerful shot from the edge of the box. Even after this, the game continued to be end-to-end, but it gradually died down as the final whistle approached.

So, this was absolutely not what I expected at all: despite these two teams being the top two going into the game, Frimley ran away with it and won emphatically to go top. Looking at the game as a whole, though, the first half actually was what I expected from a top-of-the-table clash: tight but entertaining, with Frimley just edging things ever so slightly. However, the second half was nothing short of a demolition job from Frimley, and Bedfont were simply blown away. Overall, this game was fantastically entertaining, easily one of the best I've watched this season.