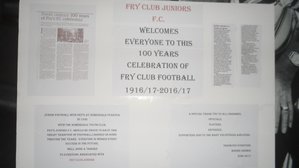 The Fry club JFC presentation was held on Sunday the 25th June.

The Fry club JFC presentation was held on Sunday the 25th June. With Players collecting their yearly trophies and then the teams individual Player of the year, Sports person of the year , skills and Penalty winners. Along with this, long service Ties were presented to players who have been at the club for 5 years and one player Kelsey Manning was presented with an inscribed Tankard for 10 years service.
Paul Marsh and Paolo Gilardoni were presented with a Chairman’s award for service to the Club as was the Vice Chairman Darren Brown.
Andy Parsons Presented the League Winners medals and the League Winners trophy to the Under 18’s Team. “ Well done guys”!

This Season also marked a significant time for Fry Football, with the club celebrating 100 years of Fry Football being set up and playing.
The first JS FRY & Sons AFC team started in the 1916/17 season in Bristol where the JS FRY & Sons Chocolate Factory was located. It grew over the years and in 1931 the factory move production and all of its sports teams the present Somerdale site. In 1956 out of the youth club a New Football team grew as Somerdale Youth Club JFC. In the 1970s a local team call Keynsham Wanderers amalgamated with the Somerdale Youth club to become Somerdale Wanderers JFC and grew again year on year.
When in the 1990’s with the junior Section blossoming. A decision to tie in with the Senior section to foster closer links and attempt to create a pathway for players to progress into the senior sides was made and the Junior Football club became Fry Club JFC.
To celebrate this unique 100 years of Fry Football. Every Fry Club JFC player was presented with a Medal which is scribed “ Fry Football Centenary. Est. 1916”. To mark the occasion.
A great occasion and lots of smiles .