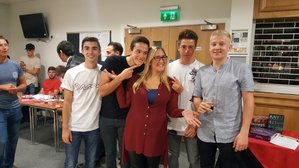 Saturday 27th August was the first social event of the 2016-17 season at Fry Club FC and it was a great success.

Thank you to everyone who attended and supported the Fry Club FC Skittles Tournament on Saturday 27th August. As a club we managed to raise over £350 in vital funds which will be invested directly back in to the football section and ensure that we continue to offer the best facilities, equipment and standard of football possible at Fry Club FC.

Just as important as raising some money was seeing a good number of people attend from all 4 senior teams. Considering the turn over in management and players at the start of this season, it was great to see so many people turn up and join in.

With £120 in prize money and a raffle which included champagne, cases of beer/cider and a much sought after voucher for sports physio treatment from our sponsors Top To Toe Physiotherapy on offer there were lots of winners on the night.

The next social event will be confirmed in the next week and is likely to be late September or early October so keep you eyes peeled for further updates.

Fry Club FC is run voluntarily by members for the members so if you have any ideas for social events or fundraisers then please speak to Liam Osborne, Joe Skinner, Matt Ollis or Dan Webb. We are really keen to put on events which everyone will enjoy and there is no such thing as a bad idea!