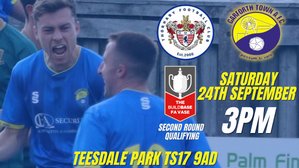 By Jonathan McGourty
3 days ago
Share via
FacebookTwitter
https://www.pitchero.com/clubs

FA Vase away trip for Town

Garforth head north for what will be a stern test at Thornaby FC in the FA Vase second qualifying round this weekend.

The Blues have lost their last four games, but Paul Marshall knows that matches against teams from the Northern Football League are always tough encounters.

Alex and Craig Hutchinson have scored the majority of Thornaby goals recently and will be the men to stop on Saturday if selected.

James Burgess was back amongst the goals for Garforth last weekend and the return of Sam Barker has been a boost in the attacking third.

Kick off atTeesdale Park is 3pm