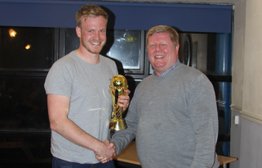 Wells sweeps the board

Toby Wells unsurprisingly swept the board at the Garforth Town presentation evening.

The first trophy of the evening was one that Toby couldn't win, the young player of the season award.
It was received by Joe Colley, a young player that has literally grown in stature over the course of the season, to become a vital part of the team.

The supporters' player of the season was announced with a short video and was the first of a hat-trick for the Garforth keeper, with the managers player and players' player awards following.

Captain James Beaston was rightly recognised with the Ralph Backhouse memorial trophy for his outstanding performances over the season.

A highlights video showed that in a rollercoaster season there were still plenty of standout moments to look back on.