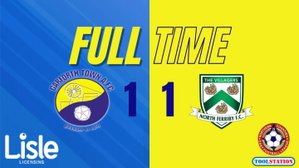 There was late drama at the Bannister Prentice Stadium when Luis Silva came off the bench to snatch an equaliser into seven minutes of added time.

North Ferriby had taken the lead on 55 minutes and looked to be heading for their fifth straight win.

Paul Marshall used all five subs in an attempt to change the tide and it worked as Garforths' late pressure told.