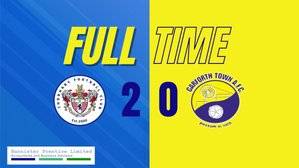 Garforth bowed out of the FA Vase with a 2-0 defeat at Thornaby FC.

Toby Wells was sent off early on for a challenge just outside the area, Sam Denton took his place between the sticks.

Thornaby took the lead in the second half and for large parts it was end to end, but the home side killed the game off with a late strike.