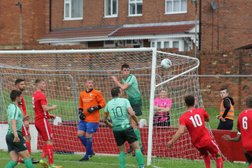 A Garforth side missing a number of key players battled out a goalless draw against free-scoring Northern League leaders Shildon to take this extra preliminary round tie to a replay on Tuesday.

Midfielder Dan Coupland and full-back Matthew Wilkinson were both named as centre-backs to replace an unavailable Mike Morris, and Alex Low who failed a late fitness test. Joe Colley was given a place in the starting eleven to fill the gap.

There was a further set-back for manager Rob Hunter on 15 minutes when captain James Beaston took a knock and had to be replaced by Helmo Silva. Lee Turner was made captain and moved into central defence to partner Coupland.

The first real chance of the game fell to Shildon’s Kurt Matthews moments later after a left-wing cross was only half-cleared. Billy Greulich-Smith headed against the post on 16 mins, but was adjudged to be offside.

The same fate befell Sean Hunter three minutes later when played in by Sam Barker, putting a low shot wide, but was also offside.
There followed a dangerous spell of pressure for the Railwaymen. Matthews forced a near-post save from Toby Wells when teed up by Jordan Lavery, before Wells turned Dale Mulligan’s diving header around the post. The resulting corner kick found Matthews on the edge of the box who saw a low shot cleared off the line by an unflappable Turner. Another corner, and this one from Matthew Robson struck the top of the crossbar, and thankfully out to safety.

Town looked to hit the home side on the counter-attack, and front men Simpson and Hunter were linking up well, but struggled to beat the offside trap. On 33 mins a 25 yard effort from Hunter was held by goalkeeper Shaun Newbrook, then four mins later Hunter’s strike on the edge of the box was deflected over the bar. The last chance of the half fell to Greulich-Smith who’s glancing header from Lavery’s delivery brought a good save from Wells.

There were fewer chances to be had in a scrappy second half. On 47 mins Robson arrowed a shot over the bar after some good play down the right, then Greulich-Smith was put clear of the Town defence but fired over the bar. On 56 mins Mark Simpson saw a 20 yard effort saved.
Wells made an excellent stop to deny Chay Liddle’s powerful strike on 69 mins, after the home side looked to shake things up with a double substitution. As the 80 minute-mark approached there was a good spell for Garforth to open the deadlock. Adam Porritt’s 25 yard strike was easily saved by Newbrook, before a superb run in from the right by substitute Jack Slinn ended in Silva seeing his shot blocked in the area for a Town corner. Buttle stepped up and found Joe Colley at the back post, but his towering header was just off-target. The action then turned to the other end in the final few minutes, with the woodwork partly coming to our rescue. Substitute Nathan Steel hit just wide from a right wing cross, then Greulich-Smith headed against the post when a free-kick was pumped in from the right flank. Wells then pulled off a brilliant save to tip a fierce strike onto the bar.

So with both sides unable to find the net, the two sides meet again on Tuesday at the Bannister Prentice Stadium where only one can book their place in the next round (kick-off 7:45pm).