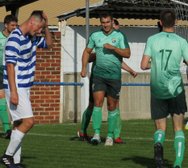 The Miners made hard work of it, but are through to the next round of the Buildbase FA Vase after a late Dan Williams goal saw off their Northern League hosts.

Rob Hunter's side dominated possession and played some excellent football, but their lack of cutting edge almost saw The Cestrians - who created few chances - force the tie into extra time.

There were first starts of the season for midfielders Jack Slinn and Kane Bingley who replaced Matt Wilkinson and Joe Colley. Fellow midfielders Lee Turner and Dan Coupland again filled in as centre-backs for Alex Low and Mike Morris.

Town started brightly with Adam Priestley forcing a save from Nathan Armin in the Chester-le-Street goal three minutes in. There was a chance for Kane Bingley shortly after when his deflected shot went just wide, then Mark Simpson shot straight at Armin on 14 mins after some good play through the middle.

The hosts had struggled to get out their own half, but had their first chance of the afternoon on 23 mins when Owen Henderson struck wide from Luke Collins' delivery.

The action soon resumed down the other end. Sean Hunter was unlucky to see his shot crash off the crossbar seven minutes later when getting on the end of Danny Buttle's cross, then Adam Porritt fired over from distance. There was another sniff of goal for Simpson just before half time from another Buttle delivery, but couldn't find the power on his shot to trouble Armin.

The chances continued after the break. Bingley's powerful 25-yard drive was just off-target, Priestley put a low effort beyond the far post, then Simpson forced a great stop from Armin with a cushioned volley. On 57 mins however Town finally broke the deadlock - Simpson making a run down the right and finding Hunter in the box to apply the finish.

Owen Lancaster went close for the hosts on 64 mins when volleying straight at Wells after a cross from the left wasn't dealt with. Two minutes later though they punished Town for their profligacy when Jack Brown rolled the ball past a stranded Wells to level up the tie.

Garforth had to do it all again but to their credit they didn't panic, and continued to create chances. On 73 mins Armin kept the Cestrians in the game when he made another fine stop to deny a fierce strike from Priestley, at the expense of requiring treatment afterwards. Substitute Dan Williams shot just wide on the edge of the area shortly after, before Armin was there again to beat off the line Porritt's inswinging corner kick. With extra time looming, Buttle almost grabbed his first goal for the club with a cross-cum-shot which came off the frame of the goal, then Williams' turn and shot was denied by Armin for a Town corner. It was a chance we grabbed with both hands to finally put the tie to bed, Williams turning home at the near post Hunter's delivery.

Priestley almost made it 3-1 in injury time with a curled effort just wide, and down the other end there were blocks by Bingley and Wells to stop the hosts equalising once more, the latter from a shot by sub Harrison Scott.

A home tie against Ryhope Colliery Welfare awaits us in the next round on 14th September, which replaces a visit to the east coast to face Bridlington Town (now tbc). Before that though, we're back in league action next Saturday when we head to Silsden (kick-off 3pm).